The Michelle Obama book tour continued in New York City on Dec. 19, and the former First Lady rocked quite an ensemble to the event. Are you feeling her yellow dress and glittery, thigh-high boots?!

Michelle Obama was decked out in Balenciaga when she appeared in Brooklyn, New York for a stop on her book tour on Dec. 19! The gorgeous 54-year-old looked absolutely stunning for the evening, wearing a yellow, Balenciaga wrap dress. However, it was her footwear that really caught our attention — have you ever see anything like those gold, glittering, thigh-high boots she was rockin’!? The boots went so high up Michelle’s leg, that they were mostly covered by the dress, but when she was walking to her seat onstage, fans were able to get a good view.

The evening at Barclay’s Center was hosted by Sarah Jessica Parker, who moderated the interview. Of course, SJP looked stunning herself, showing off her amazing figure in a body-hugging, sequined dress. The ladies looked so happy to see each other as they greeted one another on stage, and of course, the crowd went wild. Michelle and Sarah spoke for over an hour, on topics ranging from fashion to politics and many more.

This was the last stop on the first leg of Michelle’s book tour, which has kept her very busy over the last several weeks. In addition to the tour stops, Michelle has also been doing signings AND making her way around the talk show circuit! 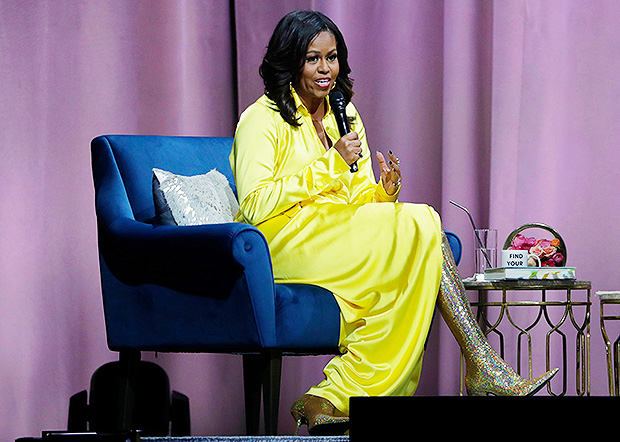 Now, of course it’s time for her to enjoy the holidays with her family. The tour will pick up again in February and last until the middle of April, with a wide range of dates across the United States. Plus, of course, the book, Becoming, is available now.