Cardi B’s platinum blonde hair and orange mini skirt had fans drooling on Instagram! But, it was her ‘awkward’ shoes that left her Bardi Gang ‘confused AF’! See her full look and let us know what you think!

Cardi B, 26, has fans pretty confused about her taste in shoes. The “Money” rapper posed in what appeared to be high-heeled sneakers (we think) on Instagram, December 19. Honestly, we’re not quite sure what you would call these shoes, but one fan guessed that Cardi’s footwear was a combination of a sneaker… inside of a sneaker. Yes, we know that sounds bizarre, but take a look for yourself!

The new mom caused a major fashion debate in the comments section of her photo, which also debuted her new, platinum blonde wig. And, the reaction from fans was a mix of emotions to say the least. “Her shoes are confusing me lol,” one fan wrote, while another asked her to “stop wearing 2 shoes.” LOL! And, there were plenty more hot takes on her shoes that rolled in.

“I’m sorry but the shoes are ugly,” another blunt fan commented. “Shoes look gross af, it will never trend,” one fashion critic wrote. Meanwhile, another asked a burning question that we’re sure many fans had: “I wanna see a video of u walking in these.” Despite the mockery, many fans applauded Cardi for her matching orange mini skirt and jacket set! 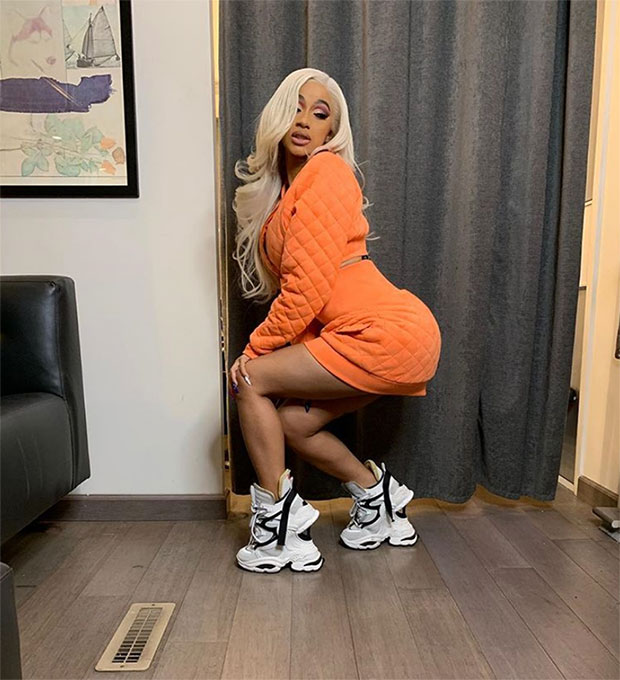 Cardi B wears a platinum blonde wig and a matching orange mini skirt and jacket set with high-heeled sneakers in a photo on Instagram, December 19.

On the same day she posted the photo, Cardi also teased a new song. She shared a clip to Instagram on Wednesday that showed her lip-syncing along to an unreleased song in front of a soundboard. The track, which featured a heavy bass, went something like this: “Press, press, press, press, press / Cardi don’t need more press / Kill em all put them hoes to rest, walk in bulletproof vest / Please tell me who she’s gone check, Murder C and Cardi made a mess / Pop up guess who bitch, Pop up guess who b–ch.”

And, she may be right about the whole press thing. Cardi has been in the news for more reasons than her music lately. On December 5, she announced that she is no longer with Offset, 27, in a video on IG. While she didn’t give a concrete reason as to why they split, rumors began to swirl that Offset had cheated… again. The two are still legally married.

Cardi’s been adamant that she will not get back with Offset. However, she admitted on IG Live that she “misses the D” on December 19. She followed up with more explicits and even added that she was “about to relapse and call” Offset. Hopefully she stayed strong!

Meanwhile, Offset’s been on an apology tour to win her back. It’s unclear if they will spend Christmas together, but he admitted that his birthday wish was to spend the holidays with Cardi and their baby. The couple shares a daughter together, Kulture Kiari Cephus, who was born in July.