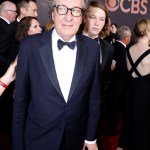 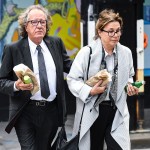 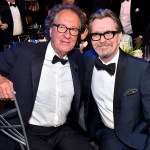 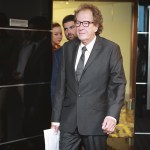 ‘Orange Is The New Black’s Yael Stone has accused Geoffrey Rush of sexual misconduct –- from dancing naked in front of her to allegedly using a mirror watch her in the shower — so get the details on the man at the center of this scandal.

“I know I have truth on my side,” Yael Stone, 33, said when talking with Bari Weiss of The New York Times. The Orange Is The New Black star has accused Geoffrey Rush, 67, of sexually harassing her when they both starred in a Sydney production of The Diary of a Madman in 2010 and 2011. “It was the biggest break I had ever had,” Yael said. “This wasn’t a stepping stone. It was a leap across the river.”

Yael claims that during the production, she received affectionate, flirtatious, flower and “occasionally vulgar” texts from Geoffrey. She also claims there were “strange intimacies in the dressing room,” in which he allegedly asked her to take off his sweaty costume at intermission. She also claims that he put a shaving mirror over the top of the partition between the backstage showers “to look down at my naked body.” She also claims that he once danced “totally naked” in a “playful, clowning manner” in front of her. So, who is this guy?

1. He’s a beloved Australian actor. Geoffrey Roy Rush was born in Toowoomba, Queensland in 1951. He is a star of stage and screen, and the New York Times describes him as “a theater-industry kingpin, capable of making a career.” He’s a former president of the Australian equivalent of the Academy of Motion Picture Arts and Sciences and he was named Australian of the Year in 2012.

He’s also Australian, like Yael, and the country’s defamation laws are one of the reasons why she kept quiet about these allegations for so long. In the US, a person who claims to have been defamed has to prove it, and prove that the allegations are false. In Australia, it’s the opposite. The publisher must prove that the allegations against the plaintiff are true. This means that in Australia, defamation lawsuits can be expensive and destructive for those who accuse powerful people of misconduct. Yael only came forward with her claims after a legal firm vowed to represent her pro-bono if Geoffrey sued her for defamation.

2. Geoffrey has denied the allegations. In a statement to The New York Times, Geoffrey said that Yael’s allegations “are incorrect and in some instances have been taken completely out of context.” He also added that “clearly Yael has been upset on occasion by the spirited enthusiasm I generally bring to my work. I sincerely and deeply regret if I have caused her any distress. This, most certainly, has never been my intention.”

3. He’s been accused of sexual misconduct before. In 2017, The Daily Telegraph reported on Geoffrey’s “inappropriate behavior” during a 2015-16 production of “King Lear.” Initially, the paper didn’t name the young actress who claimed Rush harassed her, but after he sued the publisher for making “false, pejorative and demeaning claims,” she was identified as Eryn Jean Norvill. She claims Geoffrey “deliberately” touched her breast onstage, sent her suggestive text messages and more.

“I was at the bottom of the rung in terms of hierarchy and Geoffrey was definitely at the top,” she told the court, per the Times. “I wanted to be a part of his world and we were also playing father and daughter. I felt as though if I was to speak or reprimand his behavior, I would jeopardize the relationship, that tenderness, the closeness that is needed in those two roles. I had the least power. What was I supposed to do?”

4. He’s an Oscar winner… Geoffrey is a celebrated actor, one who received critical praise for his roles in such films as The King’s Speech, Quills, and The Life and Death of Peter Sellers. However, it was his role as piano prodigy David Helfgott in the 1996 biopic Shine that won him practically every award. He won the BAFTA, Critics’ Choice, Golden Globe, Screen Actors Guild and the Academy Award for his role in the film.

5. …but he’s probably best known in the US for being a pirate. For those who don’t check out the Criterion Collection, Geoffrey is best known for portraying Captain Hector Barbossa – the former rival-turned unlikely ally of Johnny Depp’s Jack Sparrow — in the Pirates of the Caribbean films.