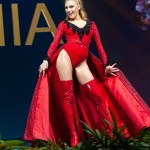 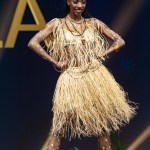 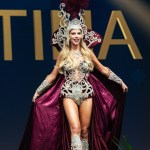 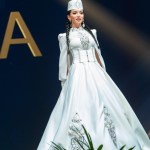 Hey, Steve Harvey… do you need some ice for that burn? Miss Costa Rica made fun of the time he confused the winner with the runner up and it was HILARIOUS.

Fans are ready to give Miss Costa Rica the crown after her hilarious dig at Steve Harvey during the Miss Universe pageant on Dec. 16. The contestant, Natalia Carvajal, was named a semi-finalist, and was thus given the opportunity to walk up and talk to the Family Feud star. Caravajal is a TV host in her home country, so Harvey asked her if she had any advice for him, host-to-host, and man did she have some things to tell him.

After telling him to come closer as if she was telling him a secret, Miss Costa Rica got real by saying, “If they give you a really, really important envelope, try to read carefully.” Harvey gave the audience that look he saves for when someone says a wild answer on Family Feud, adding that he can’t believe people won’t let it go.

Miss Costa Rica was, of course, referring to the time Harvey named the wrong contestant as the winner at the 2015 pageant. If you’ll recall, he announced to the entire world that Miss Colombia Ariadna Gutierrez won the crown, when she was actually the first runner-up. It was actually Miss Philippines Pia Alonzo Wurtzbach who earned the title.

me when I hear what Miss Costa Rica said in #MissUniverse pic.twitter.com/Gwm2boHrcy

Twitter immediately exploded after Miss Costa Rica brought up the incident. “I dont usually watch the #MissUniverse but I just caught it as miss #CostaRica. Sarcastically told #SteveHarvey to read the envelope carefully lmao. Hilarious! Love it! Hopefully, he gets the name right, this time!” one person tweeted, while another wrote, “MISS COSTA RICA DESTROYED STEVE HARVEY LMFAO #MissUniverse.” Yeah, that moment quickly became the highlight of the night.