After 13 years together, Jason Momoa, 39, and Lisa Bonet, 51, are still more in love than ever…and they proved it while attending the Los Angeles premiere of his new movie, Aquaman, on Dec. 12. The happily-in-love duo posed for photos on the red carpet, and even shared kisses for the cameras as photographers snapped away. The couple both dressed in black for the event, with their long locks flowing. Lisa styled her dreads in a half up/half down style, and at one point, Jason even ripped off his jacket to strip down to nothing but a tank top and slacks so he could show off his superhero muscles. Damn!

Jason and Lisa’s two kids, Lola, 11, and Nakoa-Wolf, 9, were also on the carpet at the premiere, and the family looked SO cute together as they posed for group photos. Jason’s mother, Coni, was also with the group. Of course, Jason also posed for some photos with his co-stars, including the always gorgeous Nicole Kidman and Amber Heard. Nicole wore a halter, ruffled gown, with her hair pulled back into an updo, while Amber slayed in a sheer dress with sequined green paneling. Super sexy!

Jason and Lisa got together in 2005, but did not officially get married until Oct. 2017. Before that, she was married to Lenny Kravitz, but they ended their relationship in 1993. However, the split was amicable, and Lisa and Lenny are still friendly to this day (they share one daughter, Zoe Kravitz, together). 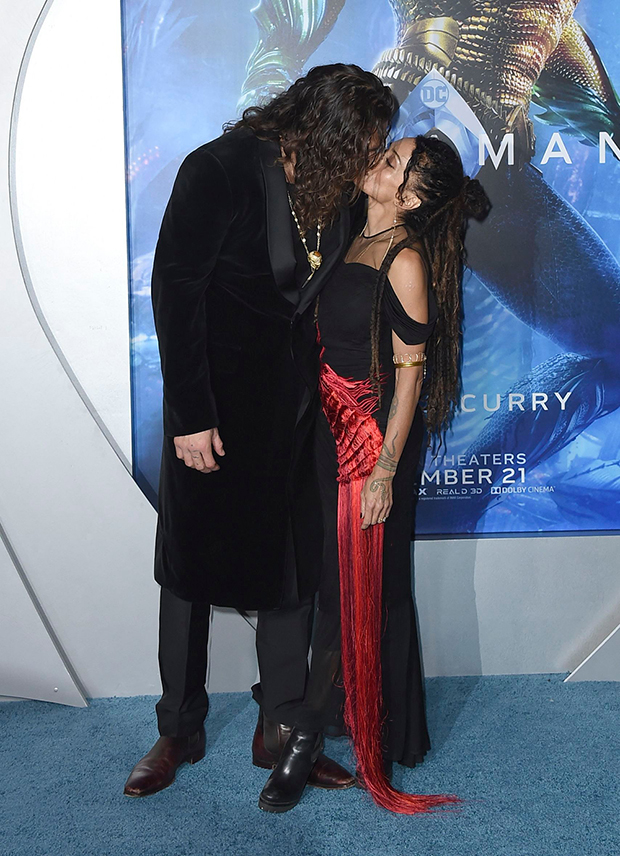 Lenny also has a tight relationship with Jason. Earlier this week, the Aquaman star even shared a photo of the duo sporting matching rings, which Jason revealed that he bought for them. So sweet! Aquaman hits theaters on Dec. 21.

Related: ‘Aquaman 2’: The Release Date, Cast & Everything Else You Need To Know