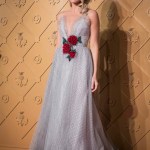 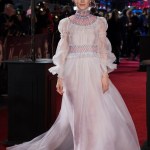 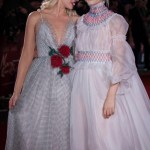 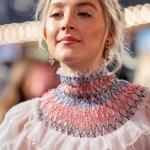 Margot Robbie and Saoirse Ronan made the transition from on-screen to IRL royalty at the London premiere of ‘Mary Queen of Scots’ on Dec. 10. See even more pictures!

Margot Robbie, 28, and Saoirse Ronan, 24, battle for the English throne in Mary Queen of Scots, but went head-to-head for best dressed at the London premiere for their new film on Dec. 10! Really, it was a tie, as both ladies stepped on the red carpet in tasteful designers. Unlike the stiff couture Elizabeth I donned, Margot loosened up from her character’s wardrobe in a Rodarte polka-dot gown embellished with gorgeous rose appliques at its center. Saoirse did about the opposite! While her character, whom is the film’s namesake, is typically seen on horseback among her male cohorts, the actress flipped the switch with a posh gown by Carolina Herrera. But both stars didn’t try too hard, as their pieces were billowy yet elegant…like real royalty! See their standalone pictures from the event below.

As for their glam, Margot stuck to a red theme on her lids and lips. “[On the eyes], I did a deep base of aubergine and taupe to give the lids dimension before [applying the] red shadow,” makeup artist Patti Dubroff told Allure. “On fair and medium skin tones, if red goes directly on the lids, it can make the eyes look sickly.” Meanwhile, Saoirse kept her makeup look more muted with peachy lips and cheeks. However,But she brought out brighter colors for the film’s  premiere in The Paris Theatre in New York on Dec. 4 — learn how her makeup artist achieved the red carpet look in an EXCLUSIVE interview with HollywoodLife!

But people were paying attention to more than Saoirse’s makeup and acting skills. A report emerged that Saoirse was dating her on-screen husband in the film, Jack Lowden, after the NYC premiere! “Jack was following her all over,” a source told Page Six, and the outlet also claimed that the two were an item. “He even followed her to the bathroom and was waiting outside for her. They were very close.” The two have yet to confirm this dating rumor.