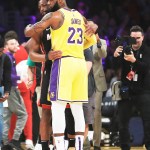 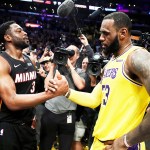 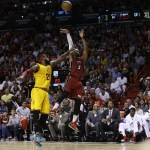 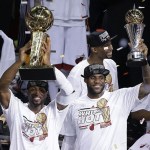 It’s the end of an era. Former teammates and best friends LeBron James and Dwyane Wade faced off for the last time, and after the game, King James he’s ‘gonna miss’ Dwyane after he retires.

Emotions were running high before the start of the Dec. 10 game between the Los Angeles Lakers and Miami Heat, as NBA fans knew this would be the last time LeBron James, 33, and Dwyane Wade, 36, shared the court. DWade is retiring at the end of the season, and at the end of the game, LeBron couldn’t hold back his appreciation for his former teammate. “Like I’ve been saying all week, it’s bittersweet, man. Every possession, it was like, the next one’s getting closer and closer to the last one,” he told NBA’s 3DTV.

“A lot of emotions going on right now for me,” LeBron continued, “knowing that I’m losing a brother in this game that I’ve had so many wars with, so many wars each [together on the same team] and separate…this is my guy.” Afterward, LeBron said that DWade is “one of the greatest players to ever play this game…and we’re gonna miss Flash, man.”

It’s obvious that these two love each other, especially after seeing Dwyane’s reaction after the final possession in the game. As if it were a movie, it came down to LeBron vs. DWade. LeBron “switched onto his old friend,” per ESPN, forcing Dwyane to miss his 3-pointer shot in the closing seconds of the game. This ensured the Lakers’ 108-105 win over the Heat, but DWade wasn’t even mad. “He knew my move at the end that stopped me from getting to my shot,” Wade said after the game.

“That’s how well we know each other, man. Just two competitors who enjoy the game of basketball, who love each other and love competing. So I’m glad that in my 16 years that we were on the court together, we was in this game, we’ve made a big impact on and off the court,” he added. “…I knew at some point after the game it was going to hit me that this would be the last time we was competing against each other, and it hit me right away once the buzzer sound.”

“And we got an opportunity on the court just to look at each other and be like, ‘Man, this has been fun, this has been one helluva ride,’ and we’ve enjoyed it together,” he added.

Dwyane announced on Sept. 16 that he’s going for “one last dance,” and will hang up his jersey at the end of the 2018-19 season. Dwayne won three NBA championships, two of which happened when LeBron was part of the Heat. He’s a 12-time NBA All-Star, the 2006 NBA Finals MVP and a future Hall of Famer.