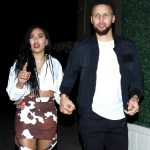 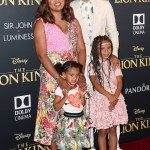 Steph Curry, one of the best NBA players of all time, seems to have mastered the physics of basketball. However, in other science-related news, Steph doesn’t seem to believe that the lunar landing was real. While on Vince Carter and Kent Bazemore‘s Winging It podcast with Andre Iguodala, Steph asked, “We ever been to the moon?” That’s when multiple people responded, “Nope.” Then Steph reacted, “They’re gonna come get us. I don’t think so, either.” Um… what?

Needless to say, Twitter had some thoughts about this. @Max_Lederman tweeted, “@StephenCurry30 calling into question the greatest accomplishment in human history does such an incredible disservice to the men and women who sacrificed so much to get us to the moon. It’s incredibly irresponsible for someone with your platform to ignore facts like this.” He added, “this conspiracy theory has been debunked countless times, but now kids who look up to you will refuse to believe facts. What’s worse is it comes at a time when we DESPERATELY NEED people to trust scientists about the dangerous effects we are having on the planet’s climate.”

And the angry responses idd not stop there. One fan, @dicewiley, felt that Buzz Aldrin would have some choice words for Steph Curry: “Buzz will bust him in the chops for that nonsense! @donnywebber wrote Steph Curry is wrong.” Another Twitter user @SaintOrange  wrote, “Did Steph Curry really question the moon landings? We hope not.” We also hope not as well. We’ll keep you posted with all of the latest news about Steph. In the meantime, check out all of the latest pics of Steph and his family in our gallery above.