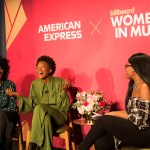 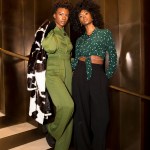 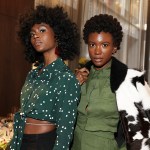 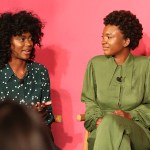 We sat down with the Janelle Monae Protégés to talk being honored at Billboard’s 2018 Women in Music, & the serendipitous story of finding a mentor in their biggest idol!

It all began in a Target parking lot. That was the first time that Alexe Bell of St. Beauty first met Janelle Monae, the woman who would wind up being the mentor to her, and bandmate, Isis Valentino. Fast forward a few years, and the three women are hitting red carpets together, embarking on national tours, and well, taking over the world! The musical duo were the recipient of the American Express Impact Award at Billboard’s Women in Music 2018! Janelle handpicked the winner herself this year, and after being asked to select a rising female star who is paving their own way, she landed on St. Beauty. HollywoodLife sat down with the honorees for an EXCLUSIVE chat about their whirlwind year, and how one of the biggest power players in music, ended up being their mentor.

First of all, congrats on this honor! Why do you feel an obligation as female artists to make an impact on the industry around you?
Alexe: It comes down to our core values. We had to make a list of why we’re doing this. And those were the top two things: heal and inspire. It may sound vague but those two things are really important to us.
Isis: I think subconsciously, it’s almost an obligation, because we know the platform that we have, and we know that as artists we appreciate people who use their platform in a way that’s like ‘ok, I know why i’m doing music.’ I think just because of the people we are there is a sort of obligation, but we feel like we want to, not that we have to.
Janelle has been such a huge advocate for your music. Is there anything that she’s taught you along the way?
Alexe: It’s really just about watching her in her element. We toured with her. The first tour that we went on with her was in 2015, everyone in Wondaland Records went on that tour, and we were able to watch her before she went onstage. She would do cardio before she hit the stage, vocal exercises…how she is onstage, she has a whole other pocket full of energy. You know, going from being really big fans of hers to actually having a personal relationship with her, it’s just a blessing. It just feels like ‘wow.’
Isis: I mean, I talked to her recently, and we were talking about this impact award, and I was like, ‘do we deserve this?’ She was just telling me how no one deserves anything, where you are is exactly where you’re supposed to be. ‘You’re doing this for a reason. Don’t doubt yourself,’ she said.
Who are some female figures that have been an inspiration for you?
Alexe: Our moms. My mom made so many sacrifices. She sacrificed her dreams and the future that she wanted, to take care of us, and that showed me her strength and inspired me along the way.
Isis: Definitely, I’d say my mom too, you know, I was very afraid, super quiet, always in the back…and she told me, ‘I was just like you,’ and ‘don’t be afraid.’
Alexe: Also – Maya Angelou. Outside of our mothers, Maya Angelou, Janelle Monae of course, Viola Davis.
Do you think fate played a part in your career? The way you linked up with Janelle after first meeting her in a parking lot is pretty crazy!
Alexe: Most definitely. It just seems like the dots got connected. Especially from like, us going about our separate lives, and then coming together.
Isis:  We were doing showcases at the store, and then she [Janelle] was like, ‘do you know anybody that can play guitar?’ And I was like, ‘I mean I can learn.’ That’s how we started becoming a band.
As a musical duo, what is the collaborative process like between the two of you?
Alexe: It really varies, like, we don’t stick to one specific thing.
Isis: It’s very collaborative between the two of us. Alexe is a little bit more eloquent than I am. I’m more airy with my words, and Alexe is like ok, that’s cool, but let’s reel it in.
Alexe: Even just having conversations before we record, and talking about what each of us are going through, that being kind of the foundation of what the song is going to be about.