Paulina Gretzky is stil madly in love with fiance Dustin Johnson despite an alleged cheating scandal in early fall. We’ve got the pic of them making out while celebrating their eighth anniversary together.

Awww! Dec. 10 is a super important day in Paulina Gretzky‘s life as she says its her anniversary with pro golfer Dustin Johnson. The 29-year-old model celebrated the eighth loving years with the sweetest Instagram stories pic. She’s seen sitting curled up in Dustin’s lap in a seat aboard a private airplane. Someone else must have taken the sweep snap for them as both her arms — and black mittens over her hands — are around her honey’s neck as they kiss passionately. “Can’t believe it’s our eighth year going” she wrote on the photo and tagged Dustin. The couple met in 2009 when her hockey legend and golf-loving dad Wayne Gretzky and mom Janet invited Dustin, 34, over to the family home for dinner, and there were instant sparks even though they were both in other relationships at the time.

In the adorable pic looks like they might have come from or were going to a snowy getaway, as Paulina also had on a warm black knit headband and comfy tan sheepskin boots to keep her feet toasty. She also had on black legging and a black coat in addition to her mittens. Justin is twinning out with his lady, wearing a matching black knit beanie.

Dustin and Paulina went public as a couple in 2012, getting engaged the following year They already have two young sons River Jones, 1, and Tatum, 3, but still haven’t tied the knot after so many years together. That’s all about to change in 2019 as we told you EXCLUSIVELY that Paulina has gone back to planning their wedding. It was on hold after the couple weathered an alleged cheating scandal involving Dustin gorgeous golf-lover and socialite Yassie Safai in September. Dustin even went so far as to release a statement reading “Every relationship goes through its ups and downs, but most importantly, we love each other very much and are committed to being a family.” A few weeks later Dustin and Paulina were seen making out after the Ryder Cup in Paris. 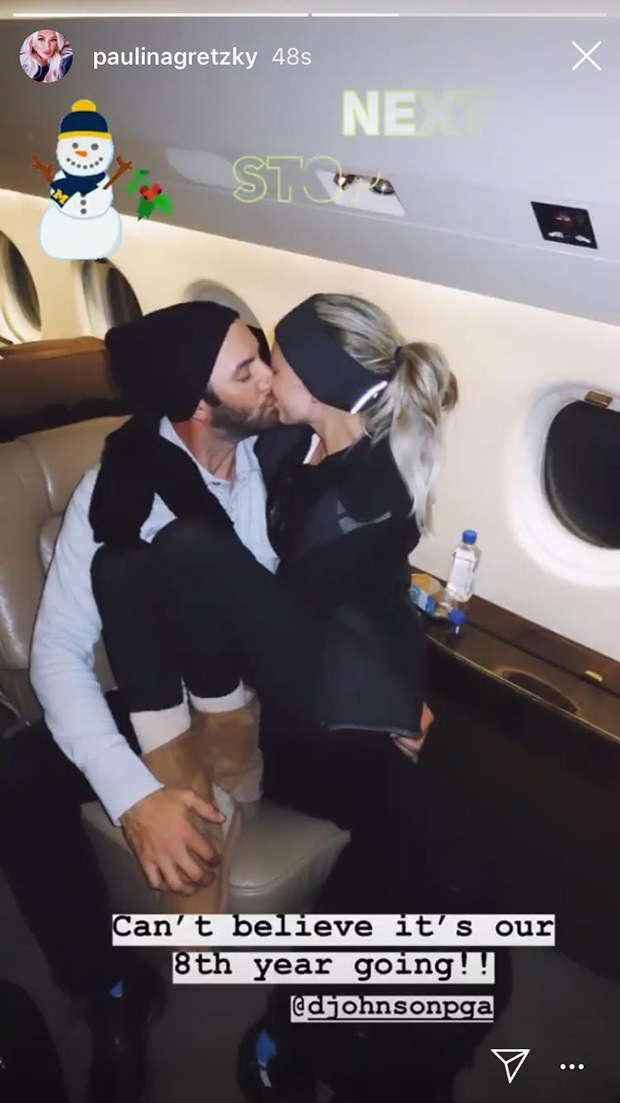 “Having a wedding has not been a huge priority for them because they already feel very married. And it’s no secret that they did go through a rocky period earlier this year so their focus has been on rebuilding their relationship. Not wedding planning. But things are very much back on track between Paulina and Dustin so the wedding planning is back on now,” our insider told us.