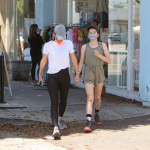 Ben Affleck and Jennifer Garner may be divorced, but they’re still getting together for church! The divorced couple were spotted with their three kids looking like one, big, happy family. See the pics!

They may no longer be married, but Jennifer Garner and Ben Affleck are still putting on a united front for their kids! The two actors, both 46, were spotted leaving church with their three kiddos — Violet, 13, Seraphina, 9, and Samuel, 6 — on December 9 in Los Angeles, and looked totally cordial. Happy, even! The exes have said in the past that despite their personal drama, they didn’t want anything affecting their kids. Remember, Ben even lived in their guest house on their (massive) property when they first separated. They’re making this co-parenting thing look like a total breeze!

Ben and Jen are both seeing other people, but they’re celebrating major events together, and apparently attending church together. No word on if this was a regular service, or a special occasion. They all apparently celebrated Thanksgiving, on November 22, together, too! Thanksgiving together was “long planned,” according to multiple sources who spoke to PEOPLE. “They always celebrate big holidays together as a family,” one source said. “The family all spent Thanksgiving together and they all cooked.” How cute is that?

Obviously, they’re always going to care about one another. They’re parents to three beautiful kids, and were married for 13 years. Plus, they had to suffer through Daredevil together. They’ll always have Daredevil. Just because they haven’t celebrated any major holidays together doesn’t mean Jennifer isn’t serious about her new beau, businessman John Miller. While Jen and John, 40, are having loads of fun and are utterly smitten, the 13 Going On 30 star is reportedly reluctant to call him her “boyfriend,” according to a report. They’re taking things easy! “She only sees John when she isn’t busy with her kids,” the insider said. “He understands that her kids are her number one priority. Jen is in a good place.”

This all comes after Ben’s stay in rehab for problems with alcohol. Ben, as a source close to the Justice League star told HollywoodLife EXCLUSIVELY, took his treatment seriously, for his family. “He doesn’t like the person that he becomes when he drinks, and he wants to be a better man, for the sake of himself, Jen, and the kids,” the source said. We’re happy to see he’s doing better!