If Cardi B didn’t show up to court today, a warrant would have been issued for her arrest. But she didn’t just show up — she wowed with a wild rainbow hairstyle. See for yourself!

There she is! After missing her last court date, Cardi B, 26, showed up for her Dec. 7 arraignment and made a major statement with her look. Although she was keeping a low profile with a brown hat and large sunglasses, which she removed in the Queens courthouse, her hairstyle was way on the other end of the spectrum. That’s because she had long, rainbow locks flowing down from beneath her hat! So while it was hard to get a great look at Cardi with so many people surrounding her entrance, it was clear that the rest of the rapper’s outfit was more subdued — an animal-print top beneath a large black coat.

Four days before this appearance, Cardi missed a court date to go to Art Basel in Miami and was warned that failure to show up on Friday, Dec. 7 would result in a warrant out for her arrest. So it’s a good thing she made it! She was released without bail, according to TMZ, but warned to have zero contact with Baddie G and Jade. Recall Cardi was arrested back in October for assault and reckless endangerment after allegedly ordering an attack on the two bartenders, one of whom she believed to be involved with her now-ex Offset, 26.

When Cardi originally turned herself into the police on Oct. 1 for her alleged crime, she was sporting short, platinum hair along with a ruffled white top, a slit beige skirt, a tan coat and a pair of white heels. So glam! 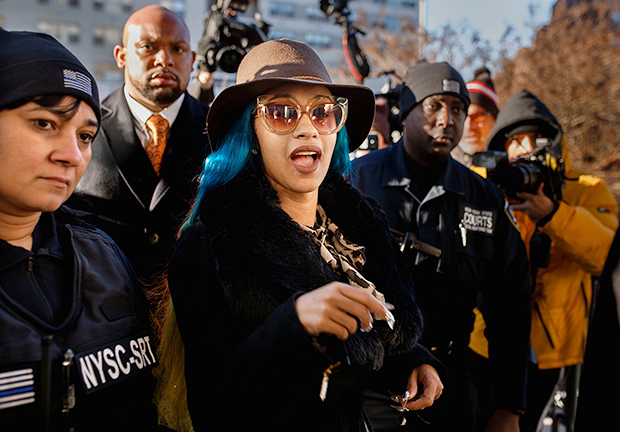 Her new rainbow hairstyle is very different, but the cameras loved it! The last time Cardi posted a pic to social media, the rapper’s hair was a vibrant red. We love how versatile she keeps her strands!