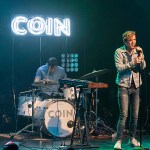 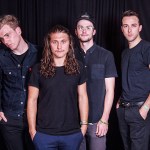 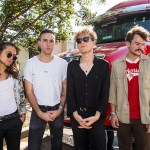 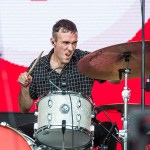 Columbia Records’ COIN is crafting catchy anthems that fans can’t get enough of! Frontman Chase Lawrence is here to give you the EXCLUSIVE scoop on the music they’ve been cooking up, & what to expect in 2019!

Who said rock n’ roll is dead? COIN are keeping it very much alive, but are infusing it with an infectious pop sound! The foursome are creating quite the buzz with their energy-filled tracks, and their two latest, “Cemetery,” and “Simple Romance,”are not to be missed. It’s no wonder that the Nashville natives (who all met at Belmont University) have racked up a whopping 100+ million streams on Spotify! As the band readies to release a full-length album, they told HollywoodLife all about their latest projects in an EXCLUSIVE interview! See what band member Chase Lawrence had to say about COIN’s wildest tour memories, and the best piece of life-changing advice he’s gotten as an artist.

Tell me about the latest single, “Cemetery.” What vibe were you guys going for with that one?

We set out to make a palatable song with a think-twice idea. It’s delicate trying to balance thought provoking and up-tempo. “Cemetery” is a song about my inability to focus on the present. Constantly, I find myself staring at the future so much that I lose sight of what’s right in front of me.

How do you define your sound as a band? When people listen to you, what do you hope they hear?

We just try to do what comes naturally. We’re not exactly trying to make “alternative” or “indie” music. I understand that’s a lane we exist in, but it’s not intentional by any means. In this new album, I hope people hear honesty. I want the thoughts of these songs to outweigh the production.

What is your favorite tour memory of all-time?

We played in Seoul, Korea May 2018. We had no idea what to expect. After brushing up on some Korean phrases, I stepped on stage only to see a massive crowd of people. I wanted to get off the stage because I thought it was too good to be real. It was an amazing show until the last song of the set when I was inches away from flames synchronized to the music. NO ONE TOLD US THERE WOULD BE PYRO. Looking back, it was terrifying and wonderful.

Who are your biggest influences, and who’s on your playlist right NOW?

Biggest influences: The Cure, The Cars, Peter Bjorn and John and LCD Soundsystem. Right now, we’re all listening to the band Broncho –  best album of 2018.

Best piece of advice another artist or band has given you?

Trust the process. I’ve been told this for years, but I never listened or comprehended what was being said to me. When I truly grasped this concept, it gave me such peace.

This does not reflect the band, but I would love to make something with Billy Joel.

What’s next? What can your fans look forward to that they might not already know about?

A world tour, new music and then more music.