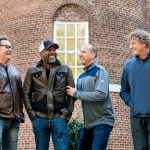 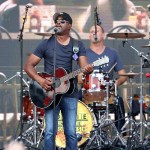 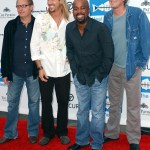 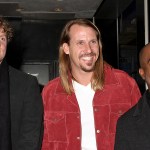 Stop everything — Hootie & The Blowfish are back! Darius Rucker and the rest of the band are recording and touring for the first time in a decade, so get all the details!

90s kids were given a huge present on Dec. 3, as Hootie & The Blowfish announced they will return to full-time touring in 2019. Plus, if that wasn’t great enough, the band – featuring Mark Bryan, 51, Dean Felber, 51, Darius Rucker, 52, and Jim “Soni” Sonefeld, 54, — said that fans can expect new music from the group next year. As fans begin to ask Santa for Hootie tickets, here’s all you need to know about the upcoming tour, about the band’s plans to celebrate its landmark album’s 25th anniversary, and just why so many people are psyched to see a band called “Hootie & The Blowfish.”

1. So, why are they called Hootie & The Blowfish? First and foremost: Darius Rocker is not Hootie. Hootie is a completely different person. While Darius, Mark, Dean and “Soni” met while attending the University of South Carolina in Columbia in the late 1980s, they formed a band and named it after the nicknames of two college friends. “Once the four of us met and started playing shows, we toured for years before signing a record deal,” reflects Darius Rucker in a press release.

“Having those shows at fraternity houses, clubs and dive bars under our belt prepared us for success to a degree, and it’s something we’re proud of – that we put in the work – but what matters to me the most is that we’re still a band all these years later. We’ve never stopped being a band,” Dean added.

2. They’re going on a massive tour in 2019 … The band went on hiatus in 2008 as Darius pursued a successful solo career as a country music performer. The band did reunite in 2015 on the Late Show with David Letterman as part of David’s retirement tour. They announced that they will go on a 44 city tour, kicking off in Virginia Beach on May 30.

3. … and recording their sixth album. The band will release its sixth album in 2019, the first since 2005’s Looking for Lucky. The band’s debut album, Cracked Rear View, is their most successful. It has been certified 2x Diamond (that’s 21x-platinum) by the RIAA and is the fifth-most certified studio of all time. The album had such monster hits as “Hold My Hand,” “Let Her Cry,” “Only Wanna Be With You,” and “Time.”

Their sophomore release, Fairweather Johnson, went platinum 3-times. While 1998’s Musical Chairs and 2003’s self-titled release were successful, neither came close to the massive phenomenon that was Hootie’s first record.

4. Tickets are on sale. “Citi is the official presale credit card for the Group Therapy Tour. As such, Citi cardmembers will have access to purchase presale tickets beginning today at 10:00 am local time until Thursday, December 6 at 10:00pm local time through Citi’s Private Pass program.

Hootie & the Blowfish fan club members can also access an exclusive pre-sale starting today, Dec. 3, at 10 a.m. local time. Barenaked Ladies fans [who will open for Hootie during the tour] who have purchased VIP packages in the past will receive an exclusive code to purchase tickets early on Wednesday, Dec. 5 starting at 10 a.m. local time before they go on sale to the general public this Friday, Dec. 7.