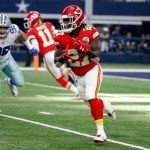 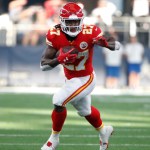 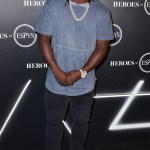 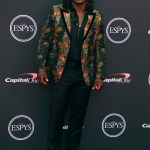 Kansas City Chiefs’ star running back Kareem Hunt is in big trouble after video surfaced of him attacking and kicking a woman. We’ve got five things to know about the NFL star.

**UPDATE 3 ** Kareem released the following statement to ESPN after being cut by the Chiefs: “I want to apologize for my actions. I deeply regret what I did. I hope to move on from this.”

**UPDATE 2** The Chiefs have CUT Kareem from the team for lying to them about the incident. “As part of our internal discussions with Kareem, several members of our management team spoke directly to him. Kareem was not truthful in those discussions. The video released today confirms that fact. We are releasing Kareem immediately,” the Chiefs said in a statement late on Nov. 30. The team was aware of the incident that happened in February but until now there had not been video to prove what really happened.

**UPDATE:** The NFL has released the following statement: The NFL has placed Kareem Hunt of the Kansas City Chiefs on the Commissioner Exempt list, and as a result, he may not practice, play or attend games. The NFL’s investigation, which began immediately following the incident in February, will include a review of the new information that was made public today.

Kareem Hunt might have just sunk his team’s chances at a 2019 Super Bowl bid, but he brought it all on himself. The second-year star running back was caught on video violently attacking a woman in a Cleveland hotel in February of 2018. TMZ reported the incident at the time, but now they’ve obtained the surveillance footage. It shows him shoving a woman, who then hits him in the face. Instead of diffusing the situation, the 23-year-old Pro Bowler is seen pushing her down and kicking her. The site reported on the incident shortly after it happened and the Chiefs did not take any action against him, and he’s played in every game so far in 2018. We’ve got five things to know about Kareem.

As a rookie, Kareem rushed for 1,327 yards and earned himself a Pro Bowl selection. He’s proven to be a standout again with 824 yards so far this season helping the Chiefs to a current 9-2 record. For his 91 yards including a 50 yard touchdown in a win against the Cleveland Browns in week nine this season, Kareem was named AFC Offensive Player of the Week.

2. Kareem’s incident was known to the Chiefs organization in Feburary but he received no punishment.

During training camp Kareem told reporters that coach Andy Reid‘s message to him following the off-season altercation was “Just move forward and focus on football,” Kareem said the Chiefs coach told him. He then said “I’ve learned from it and I’m focused on football.”

3. Kareem is getting scolded hard by former Chiefs running back Larry Johnson, who had a violent past.

Larry was arrested four times since 2003 while an active NFL player for assaults on women. He tweeted to Kareem following the video release, “I thought I made my mistakes painfully clear!!!! I thought I was a perfect example of what NOT to do!!!! “I thought by speaking aloud about my pitfalls that players after me could see these situations before they’d happen. REALLY F**KING UPSET KAREEM.”

4. Kareem allegedly punched a man in the face in June.

In another TMZ report, the star rushing back allegedly hit a man in the face at the Bay Lodging Resort in Put-in-Bay, Ohio. No arrests were made as the the man declined to press charges.

5. Chiefs Chairman and CEO Clark Hunt did not punish Kareem for either alleged incident and explained it away as him being a “young man” who “learned some lessons.”

“The team’s made up of a bunch of young men,” Clark told reporters in August. “They’re not always going to make the best decisions, but we have a strong support system, both with the coaching staff and also with our player development department that works with young guys and talks to them about the situations that they want to be in. Kareem is a young man, second year in the league, obviously had a very big year on the field last year. I’m sure he learned some lessons this offseason and hopefully won’t be in those kind of situations in the future.”