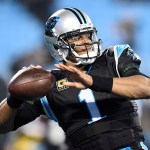 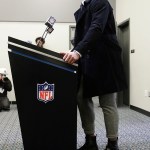 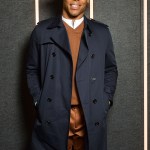 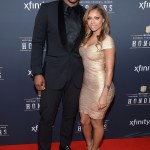 There he is! Cam Newton and Kia Proctor’s baby boy is super precious — and we’ve got the pics to prove it! Take a look at little Camidas.

Cam Newton, 29, is more than just a talented NFL player. He’s also the father of three kids, welcoming the newest to the world on July 6 with his girlfriend, Kia Proctor, 30 — and fans are finally getting a look at Camidas Swain. Kia uploaded a spread of photos to her Instagram account, and we can’t get over how cute her baby boy is! He’s sleeping adorably in the first three shots, and as if that wasn’t sweet enough already, the fourth and final pic showcases his big old smile and happy eyes. Aw! Kia ended the Insta carousel with a video of both she and her son sporting Snapchat filters. She kept referring to little Camidas as a momma’s boy and said he looked just like her. What do you think?

Kia has a daughter named Shakira from a previous relationship, but this isn’t her first baby with the Carolina Panthers quarterback! The couple, who have been together since 2013, welcomed their first son, Chosen Sebastian, in 2015. Their daughter, Sovereign Dior Cambella, followed soon after in 2017. But instead of shouting the news from the rooftops, Cam and his S.O. didn’t mention her birth until months after welcoming her to the world. That’s because these two generally don’t share too much about their little ones on social media, preferring to keep things private — which is why seeing so many photos of Camidas is a real treat!

Here’s to hoping they keep it up because he is majorly cute! But that’s no surprise, considering how adorable Chosen and Sovereign are. Who could forget the time Cam pulled a Stephen Curry, 30, by doing a press conference with them?

Cam and Kia clearly haven’t been wasting any time in growing their brood, and watching them add to their family is such a pleasure — even if it’s from an arm’s distance!