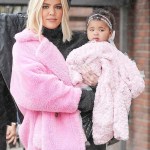 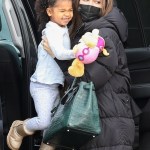 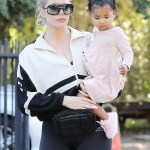 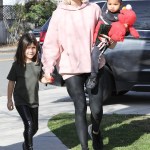 OMG, baby True Thompson has said her first word –and Khloe Kardashian isn’t too happy about her choice! The hot mama dished all about True’s latest developments in a new blog post.

Khloe Kardashian loves celebrating all of True Thompson’s little milestones…and the latest is that the seven-month-old is TALKING! “I can’t believe my baby is seven months old,” Khloe wrote in a post on her app. “True now has three teeth and she’s going to crawl any second. She also smiles constantly, but I can’t get that little munchkin to laugh unless I tickle her. Maybe I’m just not funny, LOL.She also says “dada,” but I think she means “mama” [wink emoji].” Khloe has wanted a baby of her own for SO long, and we love that she’s taking in all these little moments like this!

True was truly a blessing for Khloe, especially since she and True’s dad, Tristan Thompson, were going through major drama when the newborn was born in April. Just days before her birth, Khloe found out that Tristan had cheated on her on more than one occasion — and there were photos and videos leaked to the world to prove it. Obviously, she was devastated, but she allowed Tristan to be present for True’s birth, which was documented on Keeping Up With the Kardashians. However, she dealt with her and Tristan’s personal issues off-camera.

The two survived the cheating scandal, but it definitely appears that things have been strained in their relationship ever since. When Tristan first returned to Cleveland for basketball this fall, Khloe and True did not go with him. They eventually joined him in Ohio, and even spent Thanksgiving there, but various reports claim there are still issues between the two.

Khloe has been fueling the fire of relationship trouble by posting cryptic messages on social media day after day, but she’s also denied that there’s trouble in paradise AND has publicly shown Tristan love, too. Looks like any drama between these two is going to stay strictly between them!