Cardi B’s stunning on the cover of ‘Entertainment Weekly’, which named her 2018 ‘Entertainer Of The Year’! She flaunts her post baby body in a sequined dress with her bright blonde locks!

Cardi B, 26, is your official “Entertainer of the Year”! The “Money” rapper covers Entertainment Weekly‘s multi-cover entertainers issue, which reflects on the year and recognizes top talent in the industry from numerous genres. Cardi sits in a chair on the cover, dressed in a cleavage-baring, silver sequined dress with a matching jeweled choker. She sports a shorter do’ in the shot — a curled blonde bob.

In the issue, Cardi says her “best memory” of the past year is giving birth to her first child, daughter Kulture Kiari, on July 10. But, her professional highlight was performing at the American Music Awards on October 9. “It was my first big performance on television after giving birth, and I just wanted people to see that I’m working my ass off,” Cardi explains of her comeback AMAs performance. “The rehearsals were long days and I had bruises on my body, but it came out so perfect. It was worth it.”

Now, the rapper is focused on the year ahead. And, yes, she is aware that Mariah Carey may be interested in collaborating with her. “I’m looking forward to doing anything and everything that I could possibly take on,” Cardi, who’s started a vision board of future goals, says. “The only thing that’ll stop me right now is time.” 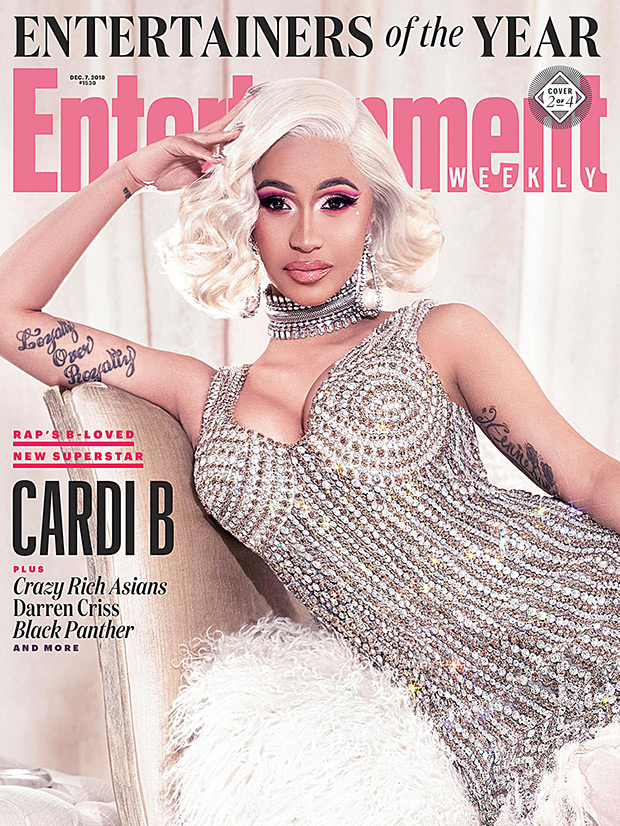 Cardi B covers ‘Entertainment Weekly’ as their Entertainer of the Year for 2018.

The issue also highlights many of Cardi’s accomplishments this year, including the April 6 release of her debut studio album, Invasion of Privacy. Although the album was subject to rave reviews and selling numbers, Cardi was still nervous leading up to its release.

“The whole week passing I was going crazy,” she told the magazine. “Just overthinking, like, ‘Am I going to sell? Am I going to do good? I hope I do good.’” Now, Invasion of Privacy is certified double platinum and holds a place on other coveted best albums lists, including Time Magazine, which ranked it No. 1.

The EW cover is one of four, and also features Darren Criss, the women of Crazy Rich Asians, and the fierce females of Black Panther — all on their own respected covers. EW spotlights eight other entertainers of 2018 — Ariana Grande, Donald Glover, Emily Blunt and John Krasinski, The Fab 5 of Queer Eye, Sandra Oh, Christine Baranski, Bradley Cooper and Lady Gaga and Nicole Kidman — with touching tributes written by those in the industry close to them.