Pete Davidson has returned to Instagram for the first time since his split from Ariana Grande. Her fans though didn’t give him a very warm welcome.

Pete Davidson quit Instagram over the summer when at the height of his whirlwind engagement to Ariana Grande. Her fans weren’t big on Ari’s choice of a fiance, especially one she got engaged to after dating for just a few weeks. On Nov. 28 he made his grand return, but it was something for him to celebrate. The new film the 24-year-old stars in called Big Time Adolescence has been selected to screen at the 2019 Film Festival in January and he posted a set of stills from the flick with the caption “see you at sundance muthf**kas.” His IG return got mixed response, especially after his Oct. 14 split with the “God is a Woman” singer.

Arianators came out in force, with many taunting him in the comments by writing “THANK U, NEXT,” the name of Ari’s breakup anthem where she gave a shout out to her exes while singing proudly about being single again. Many even made sure to include @arianagrade so that the singer knew they were coming hard at Pete. An Ari fan taunted him with the chorus to her song “Breathin,'” writing “Just keep breathin and breathin and breathin and breathinnnnn.” Another person simply wrote “idiot” in the comments.  One of Ari’s fans who only followed him because of their engagement commented. “Oh shoot I still follow you? oops yikesss.”

One Ariana fan who went off in Pete’s comments actually got scolded by her manager Scooter Braun. After the Arianator told him he was “cancelled for breaking with Ari,” Scooter told her “Stop the bullsh*t. It’s nothing like that and Pete is a good dude. No one has hate for this guy and he’s a stand up guy. Show respect because trust me everyone on this side knows he deserves it and wishes him well.”

In the film he co-stars with Machine Gun Kelly and that got almost as much taunting as his disses by Ariana fans. “Oh Jesus OF COURSE d**che bag #1 chills with d**che bag #2,” referring to the stills of him next to the rapper/actor. “The pic of him and mgk looks like the losers bracket of an Eminem look-alike contest,” another person joked of their platinum hair. Another said of Pete and MGK, “He couldn’t get Eminem, so he got the cheaper, less funny version.”

see you at sundance muthfuckas 😎 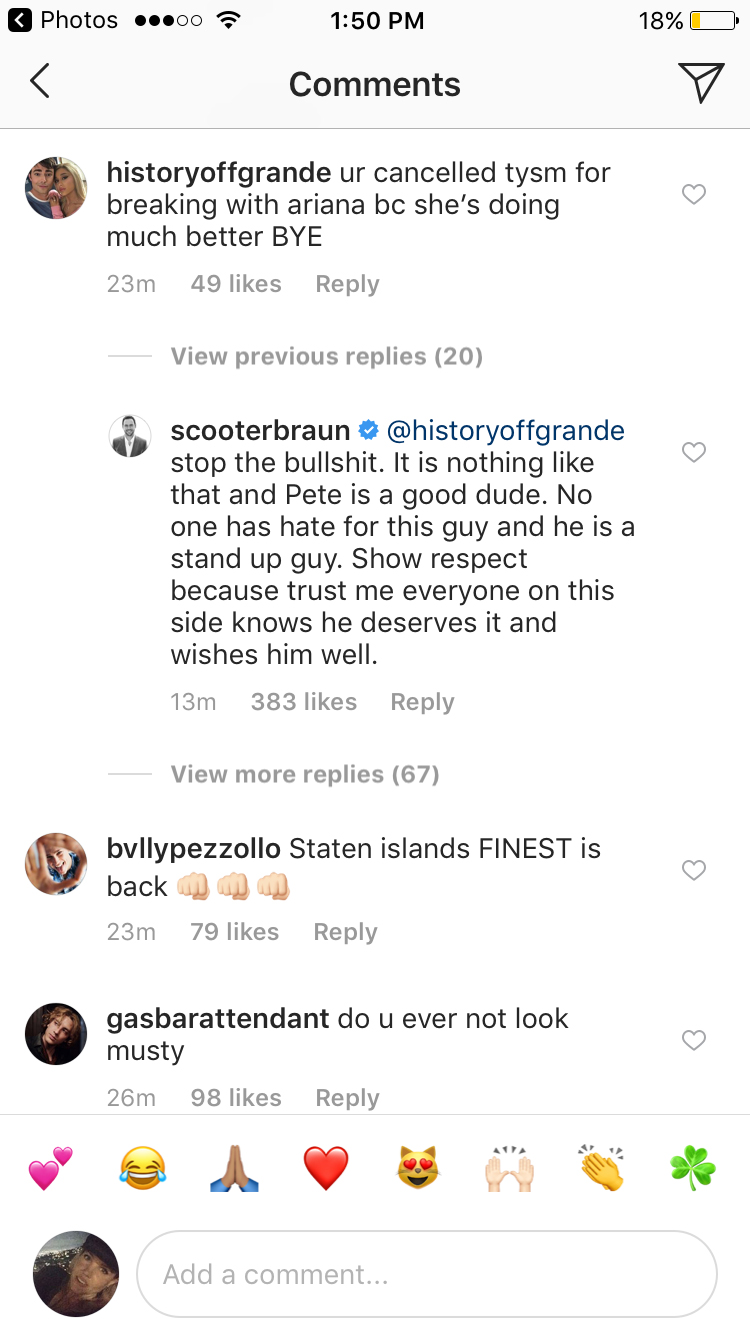 Pete still has 2.4 million followers and many are thrilled he’s back on the ‘gram. “I’m happy u doing good after all of that,i know u will find someone who loves u the same way u do, stay strong @petedavidson.” Another person told him “You’re  the best bruh.” One man told him “I’m glad to see you again,” and another added “we missed ya pete!!!!”