Is Nicki Minaj engaged? — We’re not asking, her Barbz are! After the rapper posted this photo, wearing a massive diamond ring on that finger, with a mystery man, fans have questions! Here’s what we know!

“Yo hold up, hold up, hold up, okay, hold up,” Nicki Minaj, 35, raps on her “Good Form” track. And, that’s what fans are screaming after seeing a photo of the rapper wearing a huge diamond ring on that finger! Let’s break it down, shall we? On November 26, Nicki posted two photos with a mystery man, who she seemingly partied with the night before. In on snap, she’s sporting the diamond ring, while posing with the unidentified man. So, cue the engagement speculation!

“Why is Nicki Minaj wearing a wedding ring?” one fan asked in the comments. “So you engaged now?” another inquired. An observant fan even stated the obvious: “Is that a ring I see? Interesting”. Then, there were the fans who didn’t even question it, and instead, just sent the “Barbie Dreams” rapper messages of congratulations.

But, after seeing the Barbz freak out, we’ve got questions too! Who is this mystery man? Is Nicki Minaj engaged, let alone, off the market? While those questions have yet to be answered (sorry, guys), Nicki is laughing at something. On November 27, Nicki posted two enlarged emojis to her Instagram story. — One crying laughing emoji, and another smirking one. So, maybe she’s laughing at the potentially absurd engagement speculation? Who knows! 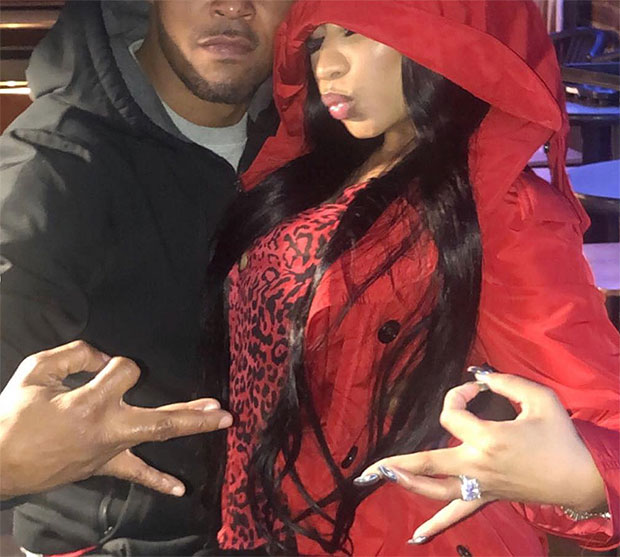 Nicki Minaj posts a photo wearing a diamond ring with a mystery man on Monday, November 26, 2018.

Meanwhile, Nicki has been busy promoting her music. The music video for her hit “Good Form” featuring Lil Wayne is set for release on Thursday, November 29. She released a teaser for it, which features her behind the wheel of a pricey convertible.