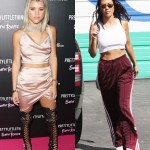 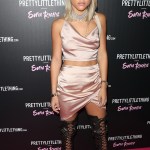 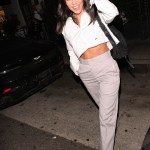 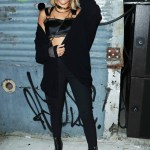 Is that really you, Kourtney Kardashian? Fans can’t stop commenting on Khloe Kardashian’s Instagram photo about how much Kourt looks like Sofia Richie. Do you see the resemblance in the look-alike pic?

Khloe Kardashian, 34, had fans freaking out about one of her latest Instagram photo. Khloe posed alongside Kourtney Kardashian, 39, but fans thought Kourtney was actually Sofia Richie, 20! The angle of the Insta pic definitely threw people off. Kourtney had sunglasses on and looked like she had blonde hair, which Sofia has rocked before. Whether or not she had on a blonde wig or it was the lighting, we’re just not sure.

Almost immediately after Khloe posted the photo, fans started commenting that Kourtney looked like Sofia. One fan commented, “Seriously thought is [sic] was Sofia,” along with a shocked face emoji. Another fan thought Kourtney was Sofia! Fan gracieehopkins wrote, “Imagine @kourtneykardash cringing while looking thru the comments and reading that so many people thought she was @sofiarichie.” Italianqt2323 commented, “Damn I thought that was Sofia lmao.” Marisajackson_ had the same thought: “100% thought this was Sofia.”

Kourtney sparked a lot of commentary over Thanksgiving weekend. Kourtney was forced to speak out after fans believed she was pregnant with a fourth child because a video Kendall Jenner, 23, posted on her Instagram Story. In the photo, Kourtney’s hand is resting on her stomach, which made some fans think she was expecting again! Kourtney responded to a fan and wrote, ” “No, but how good does my arm look in that last photo?”

Kourtney spent the Thanksgiving holiday with her family and Scott Disick, 35, the father of her three children. HollywoodLife learned EXCLUSIVELY why Scott spent the holiday with Kourt and not Sofia. “Kris [Jenner] hosted Thanksgiving at her new place in Palm Springs this year and Scott wanted to be a part of it so he kind of had to spend the night,” a source close to Scott told HollywoodLife EXCLUSIVELY. It was “important” for Scott to spend the holiday with his kids. “They’re still his priority,” our source added.