Oh snap! Iggy Azalea‘s has joined the club of people looking to make some extra coin by promoting flat tummy teas and shakes via their Instagram accounts. That got the attention of her nemesis Azealia Banks, who is calling her out as broke for turning to doing the social media ads. In photos posted to the 28-year-old Aussie’s Twitter and Instagram accounts on Nov. 26, it showed Iggy in a cleavage baring black bra while exposing her taut tummy with the packets of Flat Tummy Co.’s meal replacement shakes on the kitchen countertop in front of her in what she herself had to label as an ad.

“#ad Y’all can’t even hate on it. @flattummyco’s meal replacement shakes have gotten me more definition in my tummy without losing my ass, and they’re 20% off RIGHT NOW.,” she captioned the photos and Azealia had a field take with it. She screengrabbed Iggy’s tweet and wrote over it on her IG stories that “Aww, Iggy is broke” with a frowning face.

“I remember when I had to do flat tummy tea ads for a little weave money. Those were rough times. And she had the nerve to make fun of my soap. Yikes!” she continued. Azealia began a side hustle several years ago by making her own soaps and selling them online. Iggy made fun of the products in Oct. of 2018 after Azealia dragged the Aussie rapper for having to cancel her tour, the second time in three years she’s been forced to do so. 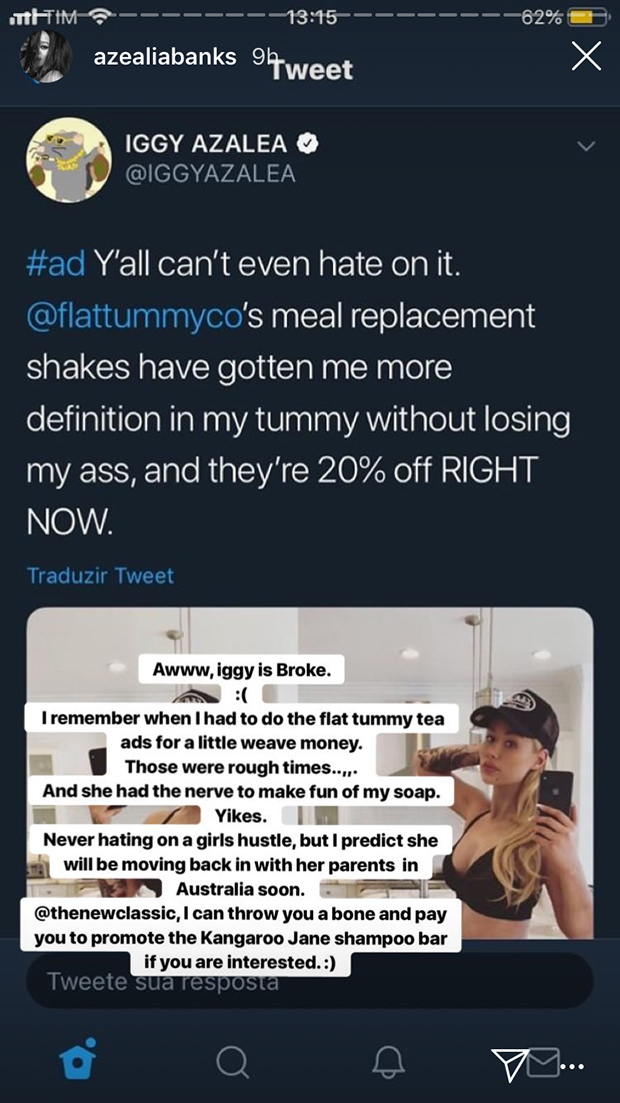 “Never hating on a girl’s hustle, but I predict she will be moving back in with her parents in Australia soon,” Azealia continued in her taunt. Then she addressed Iggy directly, adding “@thenewclassic, I can throw you a bone and pay you to promote the Kangaroo Jane shampoo bar if you’re interested :)” BRUTAL!

Azealia has always been a thorn in Iggy’s side. She gave the Aussie the nickname “Igloo Australia” in 2014 accusing the white rapper of appropriating black culture then staying silent when police violence against blacks happens. It stuck and now even Urban Dictionary lists the nickname as a description used for when discussing Iggy.

Related: Iggy Azalea’s Son Onyx Kelly: Everything To Know About Her Kid With Playboi Carti

Maybe Iggy does need some extra cash. She hasn’t had a major hit since 2014’s “Fancy” and she’s currently without a record label, parting ways with Island Records in earlier this month, her second record company fallout in 2018.  She left Def Jam in February after she publicly called out the CEO on Twitter for refusing to release more singles off her sophomore effort Digital Distortion. The album finally dropped in Aug. of 2018 after over a year of ongoing delays. Then her tour got scrapped. Poor Iggy is not having a very good year.