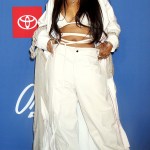 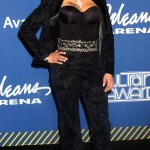 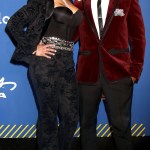 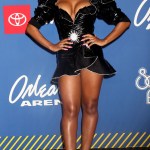 Be still our hearts! Normani was a living goddess on the Soul Train Awards red carpet, and we have the pics to prove it!

Two thousand eighteen is Normani Koredei‘s year! The Fifth Harmony breakout star just dropped an incredible song with 6LACK, “Waves”, and now she’s lighting up the Soul Train Awards. Normani, 22, hit the red (black) carpet at the awards show in Las Vegas wearing the shortest dress imaginable that showed off her incredible, long legs and ample cleavage. Seriously; look at her! Her mini is giving us some 80s vibes with its poufy sleeves and ruffles, but the tight silhouette is all modern.

We get why the Fug Girls described it as a “Sexy Maleficent” Halloween costume, but we’re digging it. Normani was dangerously close, though, to a major wardrobe malfunction in this dress. The top seems to be glued on — that’s the only way we can think of to make it not slide down! Her flirty skirt is this close to flying up, too! Normani kept her cute bob sleek, her makeup subtle, and only accessorized with a pair of black heels and some rings. The pink nail polish is the perfect pop of color!

Sexy style aside, we’re really looking forward to Normani’s debut album! “Waves” was just the tip of the iceberg. Speaking to PAPER Magazine in October, Normani said of the upcoming release, “I see the vision before I even make the records. I want to create records for women that haven’t been created yet — records that women need. The record that I need to feel good when I don’t feel so good. My job as an artist is to be as honest as possible.”

For more of the most exciting, hottest looks at the 2018 Soul Train Awards, scroll through our gallery above! Your jaw is going to drop when you see the outfits Erykah Badu, Faith Evans, and SZA wore on the red carpet!