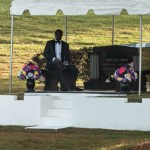 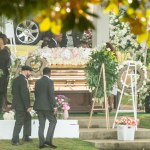 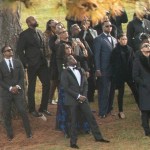 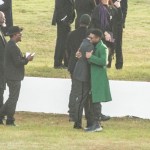 Diddy ‘fought back’ tears while delivering an emotional eulogy at the funeral for his former flame Kim Porter. Here’s what we know about his address.

Despite reports that he might be too overwhelmed to speak at his ex Kim Porter‘s funeral on Nov. 24, Diddy decided to get up and speak. Giving a tearful eulogy, the rapper nearly broke down speaking of Kim as she was laid to rest in a beautiful golden casket, according to the Daily Mail. As part of the procession, Diddy and other attendees walked out to “What’s Going On” by Marvin Gaye. In another heartbreaking pic, Diddy can be seen sitting alone by Kim’s tomb. See the moment Diddy walked away to gain some composure from the day’s ceremony below.

We reported earlier how it was uncertain over whether Diddy would give a eulogy or not at her service. A few days, ago, a source close to Diddy told TMZ that the rapper “would like to deliver a eulogy” but at the point he was “still so distraught” that it was unsure if he’d be up for the task.

Earlier in the day, Diddy looked absolutely heartbroken at Kim’s funeral. Appearing at Cascades Hills Church in Columbus, Georgia, Diddy was accompanied by 1,200 to 1,500 mourners. Among those mourners were Kimora Lee Simmons, Mary J. Blige, Dallas Austin, Yolanda Adams, Faith Evans, Winnie Harlow, and more celebrities. Our hearts continue to go out to Diddy, and all of Kim’s family, loved ones and friends.

We’ll keep you posted with all of the latest news surrounding Kim Porter’s funeral. In the meantime, check out all of the photos from her ceremony here.