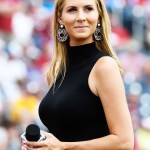 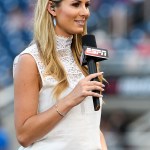 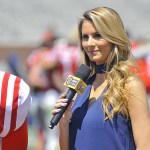 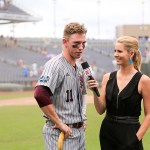 Laura Rutledge took a nasty tumble as two players crashed into her during the University of Georgia’s football game. Yet, after player Prather Hudson knocked her down, he tried to pick her up – for a date!

“Took an L in Athens today,” ESPN reporter Laura Rutledge tweeted on Nov. 17, following the University of Georgia’s game against the University of Massachusetts. While reporting on-air, two players spilled over the sidelines and directly into her, knocking the woman to the ground. Thankfully, she was made of strong stuff and was able to get back to her feet. “So many thanks to everyone at @UGAAthletics for their help after this happened…even though I’m a Gator.”

Laura’s loyalty to the University of Florida Gators, bitter rivals to the Georgia Bulldogs, didn’t stop UoG player Prather Hudson from trying to find some SEC romance. “Hey @LauraMRutledge really sorry I knocked you down, but… I can pick you up at 7,” he tweeted a couple days later, after the clips of Laura’s collision made the rounds online. Here’s hoping that he does better research at school, because Laura’s married to professional baseball player Josh Rutledge.

She shot down the date with a crying-laughing emoji face, which…isn’t that bad, in this day and age. When some fans thought that Prather’s line “went over her head,” she responded with, “nope, I’m married.” RIP. At least, you can’t blame Prather for trying. Though, if his method of picking up women requires him knocking them down first, he might need to work on that technique.

Laura might seem familiar to some, as the 30-year-old is a former Miss Florida, according to Daily Mail. But her heart was not on the catwalk, but out in the sports field…even though she was never really good at them herself. “I was terrible at all sports!” she said in an interview with SB Nation. “I tried, but I did a little bit of soccer, ran a little bit of track, but I was not good enough to really get beyond any total beginner level. I did just enjoy watching them though.”

Took an L in Athens today. So many thanks to everyone at @UGAAthletics for their help after this happened…even though I’m a Gator 😏 pic.twitter.com/b1FTCPaqtH

Hey @LauraMRutledge really sorry I knocked you down, but… I can pick you up at 7 😎 https://t.co/jkHsTsLk0s

“There’s still always times where people will doubt you, and it’s probably true for anybody who hasn’t played the sport,” she said when discussing the adversity a woman faces in sports journalism, “but probably more in football for women. And certainly, there’s so many of these incredible women who have come before me that are amazing journalists and have such wonderful credibility that sort of paved the path for all of us now, and I’m so thankful to them. The challenges that they faced were much different and much worse than probably what I even face, but there are times where people doubt me and you just kind of have to brush it off and keep going.”