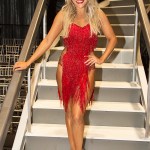 In honor of another season of  ‘DWTS’ coming to an end, we’re taking a look at the sexiest costumes to ever hit the show’s stage! Check ’em out here!

Season 27 of Dancing With The Stars has come to an end, and while we loved the dancing, we also loved the costumes! We’ve seen some gorgeous looks worn by contestants this season, as well as in all the years’ past, and a good outfit can really set the mood for a performance.The dance-centric TV show has held a number of steamy looks through the years though, and we’re looking at the best ones to date!

Despite not winning the Mirror Ball trophy, Milo and Witney were total show stealers during season 27. Between their incredible good looks, and fit bods, these two stars looked good in just about anything. During the Oct. 8 episode of the show, the pair danced a Jive to “Can You Do This” by Aloe Blacc, and they STUNNED in attention-grabbing metallic outfits. The matching pair were hard not to notice — especially Witney in her teeny-tiny bra and underwear ensemble. The energy-filled performance was also insanely sexy thanks to Witney’s skin-bearing look, and was definitely one for the books.

When Peta Murgatroyd was paired with James Maslow on the show back in 2014, she wore sexy red lingerie for one of their dances. The word “sexy” would actually be an understatement. Her toned body looked incredible, and James’s abs were on full display as well! Don’t even get us started on the time Kim Kardashian was on the show. One of her outfits, a skintight orange dress, showed off nearly the entirety of her stomach, and her abs were on full display!

This season ended with Bobby Bones and Sharna Burgess being declared the winners in one of the most controversial decisions of all time, but as we reflect on that, let’s take a look back at some of the hottest looks EVER on the show in the gallery above!