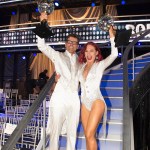 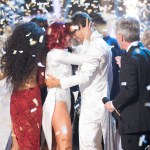 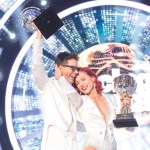 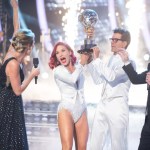 Milo Manheim was the frontrunner to win ‘DWTS’ season 27, so we were all shocked when he didn’t take home the mirrorball trophy. Milo’s mom, Camryn Manheim, was there to comfort him after the ‘tough loss.’

Dancing With the Stars fans were stunned during the Nov. 19 finale when Milo Manheim, 17, and Witney Carson, 25, didn’t win season 27. His mom, Golden Globe-winning actress Camryn Manheim, 57, was there cheering him on in the audience alongside his father, Jeffrey Brezovar. Milo talked to reporters, including HollywoodLife, after the finale and got the scoop on what his devoted mom said to him following Bobby Bones and Sharna Burgess’s shocking win. “That is the question of the night! That’s between me and my mama,” Milo said. “I’m a mama’s boy, and she told me things that made me feel super happy after a tough loss, and I’m super happy to have her here every single night.”

Milo’s BFF, Meg Donnelly, 18, was right behind his mom and dad during the show. Meg starred alongside Milo in the hit Disney Channel Original Movie, Zombies. Milo loved having his pals in the audience for the finale. “That was the win for me having them here,” Milo continued. “It makes me feel so great. Having that support, I’m blessed to have them in my life.”

Milo’s not done with his dancing career just yet. He’s joined the Dancing with the Stars: Live! A Night to Remember tour! He’ll be dancing alongside partner Witney and fellow celebs from season 27 such as Joe Amabile, 32, John Schneider, 58, Mary Lou Retton, 50, Juan Pablo Di Pace, 39, and Bobby. As for what’s next for him in regards to his career in Hollywood, that’s still to be determined! “I have absolutely no idea,” Milo said. “I wish I could tell you. I wish I could be in more stuff but that’s for Hollywood to decide.”