Diddy held a private memorial for his ex, and the mother of his children, Kim Porter on Sunday, November 18. Friends and family gathered at his Bel-Air home, which was lit with candles and filled with photos of the late model.

Sean “Diddy” Combs, 49, hosted a private memorial for the late Kim Porter at his Bel-Air home on Sunday, November 18 — three days after her death. Close friends and family gathered together to remember the late model and actress. French Montana, Mary J. Blige and Pharrell were among the more than 100 guests, according to TMZ. See a photo from the memorial, below.

Diddy’s home was filled with photos of Porter and their family. In 1998, Combs and Porter welcomed their first child together — a son, Christian Casey Combs. Nine years later, Porter gave birth to twin girls, D’Lila Star and Jessie James Combs. Diddy documented his decorated home ahead of the memorial. He showed dozens of framed black and white photos on Instagram Stories. A candlelit walkway lined the entrance to his home as guests arrived.

Diddy broke his silence about her death on November 18 in an emotional post on Instagram. “For the last three days I’ve been trying to wake up out of this nightmare. But I haven’t. I don’t know what I’m going to do without you baby. I miss you so much. Today I’m going to pay tribute to you, I’m going to try and find the words to explain our unexplainable relationship,” he wrote in the caption of a throwback video of the two. “We were more than best friends, we were more than soulmates. WE WERE SOME OTHER SH-T!! And I miss you so much,” Diddy concluded. 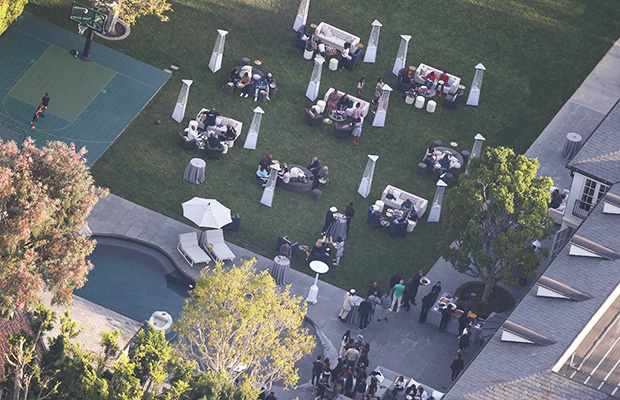 Diddy holds a private memorial for Kim Porter at his Bel-Air home on Sunday, November 18, 2018.

Diddy and Kim dated on and off for 13 years. They began dating in the ’90s, and split in 2007, after reconciling in 2003. The two remained close friends after splitting, often reuniting with their children for events and holidays.

The cause of death is unknown, as an autopsy and toxicology test results are pending. The LA Coroner’s Office told HollywoodLife.com the following: “On Nov. 16, an autopsy was performed on Porter.  The cause of death was deferred pending additional tests. Porter’s body has since been released from our facility.” According to an emergency dispatch call posted by TMZ, the call came in as a cardiac arrest. A source told the outlet she had been suffering from flu or pneumonia type symptoms for weeks before her death.