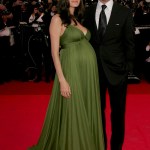 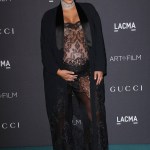 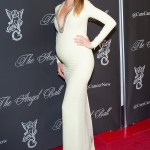 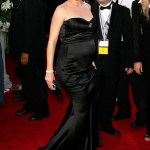 These stars took maternity style to another level! Angie, Kim K and so many more stunning celebs have flaunted their massive baby bumps just weeks before giving birth. Take a look!

Why keep your budding belly on the down low when you can put it on display all pregnancy long? That’s exactly what these celebrity moms did when they hit the red carpet during the third trimesters of their pregnancies — and their baby bumps were no joke! But whether they chose to flaunt their gorgeous curves in bright colors, tight fabrics or plunging necklines, all of these pregnant stars looked beautiful with babies on board. We loved to see them dressing for two with such confidence — or, in Angelina Jolie‘s case, dressing for three! The 43-year-old actress was carrying twins when she posed for pics at the 2008 Cannes Film Festival with her now ex-husband Brad Pitt, 54. The glowing mom-to-be welcomed twins Knox and Vivienne, 10, about two months later.

While Angelina chose to flaunt her baby bump in a green, draping dress, Kim Kardashian, 38, and Kerry Washington, 41, both showed more skin by baring their bellies on the red carpet. The reality star, who was one month away from giving birth to her son Saint, 2, showed up to a 2015 LACMA event in a sheer dress. Her bump was on full display beneath the black lace, and Kerry took a similar route at the 2016 Emmy Awards. The Scandal actress, who was a single month away from giving birth, arrived in a strapless black dress with side cutouts that stretched from the center of her chest to her back. She looked stunning cradling her belly on the carpet!

From Blake Lively‘s plunging yellow gown at the 2014 Angel Ball to Ciara’s red velvet dress at the 2017 Oscars, take a look at the gallery above for more stylish third trimester maternity looks.