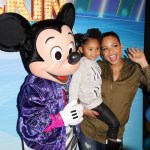 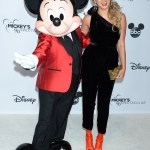 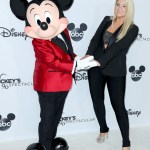 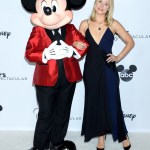 Mickey Mouse turns 90 today, Nov. 18, and we’re celebrating by taking a look back through pics of celebrities posing with the iconic Disney character!

Today is a very special birthday: Mickey Mouse turned 90! The iconic Disney character made his silver screen debut on Nov. 18, 1928 in Steamboat Willie at New York’s Colony Theater, and pop culture has truly never been the same. Mickey became synonymous with the brand, popping up everywhere from movies to theme parks.

When you think of Mickey Mouse though, you likely picture the character walking around at Disney World. Kids have been posing for photos with the legendary rodent for decades, and celebrity kids are no exception. So, in honor of this momentous occasion, we rounded up some photos of celebs standing with Mickey!

Ahead of Mickey’s birthday, the mouse was celebrated with the two-hour television event, Mickey’s 90th Spectacular. The event honored 90 years of Mickey with feature appearances by actors like Kristen Bell, Sofia Carson, and Sarah Hyland. There were also some special performances from Meghan Trainor, Josh Groban, Leslie Odom Jr., and the Zac Brown Band. While the TV special aired on Nov. 4, the photos from the event are definitely worth a look through today!

You’re never too old to love Mickey Mouse and these pics of Hyland, Bell, and Trainor with the icon prove it. Check the pics out in the gallery above!