Don’t sneeze, Amber Heard! While the ‘Aquaman’ actress looked phenomenal in a provocative black mini dress during at an event in Beijing, she came close to suffering an embarrassing wardrobe disaster!

Considering she’s portraying the queen of Atlantis in Aquaman, Amber Heard’s double-sided tape better be waterproof, heat-resistant and stronger than steel. After all, if she’s going to go out in amazing dresses like the one she wore to a photocall in Beijing on Nov. 18, she’ll have to make sure everything stays in place. Amber wore an amazing black mini dress with a keyhole cut that left very little to the imagination. The teardrop cutout revealed some sexy sideboob, but one bad sneeze and well…it would have been bad. Thankfully, she managed through the event without a malfunction.

Maybe she and co-star Jason Momoa could switch outfits next time? He, along with director James Wan, attended the photocall ahead of the movie’s release next month. Jason, with his trademark long hair and beard, wore what looks like a velvet blazer, dress shirt and dress paints. While that was pretty sexy, it was rather safe, compared to Amber’s outfit. While Jason, as Aquaman, rules the seas, Amber was queen of the runway this time.

“She’s a warrior who was raised by the queen of Atlantis before she passed,” Amber told Entertainment Tonight when describing her Aquaman character, along with what drew her to the role. “We meet Mera after the queen has long since left and she’s been raised to take over as queen her whole life. She’s been raised to serve her kingdom and rule over Atlantis with King Orm (Patrick Wilson). She’s very disciplined and almost militaristic. She’s fully dedicated to saving her nation and that serves as an impetus to go to the surface world and elicit help from Arthur who’s the polar opposite of Mera — he lives in the moment, he’s confused about his identity, he lacks the purpose and focus that Mera has, which makes them an unlikely duo. But it’s that disparity that makes a nuanced relationship between them. Where one is strong the other is weak and those differences are a conduit for their bonding.” 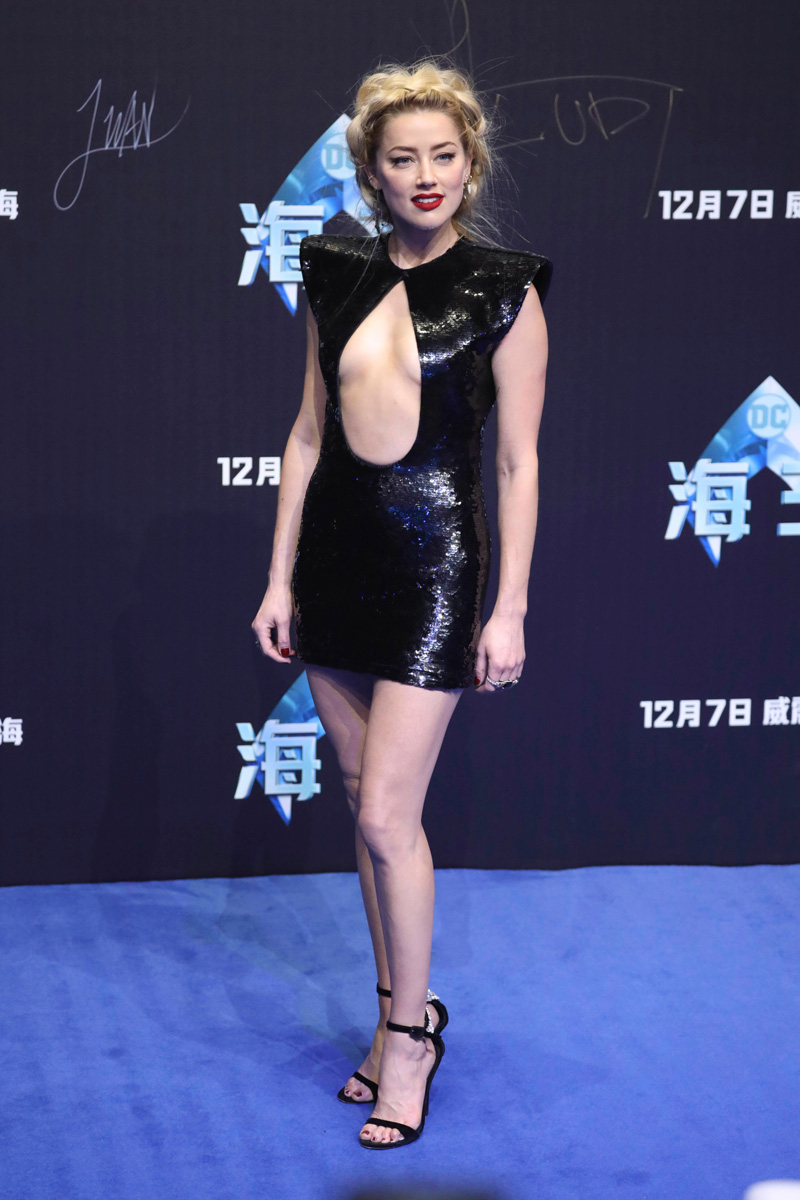 “Justice League highlighted her militaristic side. In Aquaman, we have a fuller picture, not just her as Mera of Atlantis but also see her struggle in the surface world in civilian clothes. One of my favorite scenes is her first time on the surface world and she’s forced to dress as a normal human,” Amber added. Well, here’s hoping Mera didn’t pick out a dress like the one Amber wore in Beijing, or else we’ll get a superhero wardrobe malfunction!