Donald and Melania Trump’s PDA attempts always tend to look uncomfortable rather than affectionate. We’ve got the pic where he’s holding her hand too tightly while she looks totally scared.

Is Donald Trump afraid wife Melania is going to try to run away? The president held on with a Darth Vader death grip to his 48-year-old wife on Nov. 16 as the pair headed into the East Room of the White House for a Medal of Freedom presentation ceremony. The former model had a look of fright on her face and was standing rigidly as if she were uncomfortable. Everyone’s seen her swat away her husband’s hand in past attempts to hold on to hers, but this time around Trump made sure she was towing the line and showing off PDA….even though it looked more forced than affectionate.

At leas Melania looked sensational. The first lady donned a royal blue Roland Mouret dress that was tightly fitted to show off her incredible body and trim waist. The frock by the French designer cost a pretty penny at $1,140, but she’s shown devotion to his clothing in the past and it did fit her to perfection. Melania didn’t wear any jewelry to take away attention from the form fitting dress. It looked equally impressive coming and going, featuring a silver zipper that went up the full length of the backside of the frock.

The first couple didn’t even glance at each other, looking squarely ahead as they walked down the hall to the East Room. They didn’t speak either. At one point FLOTUS made a slight attempt at a smile as they walked into the room full of recipients, their friends and family and more media, but not before her terrified look and awkward PDA had already been photographed. 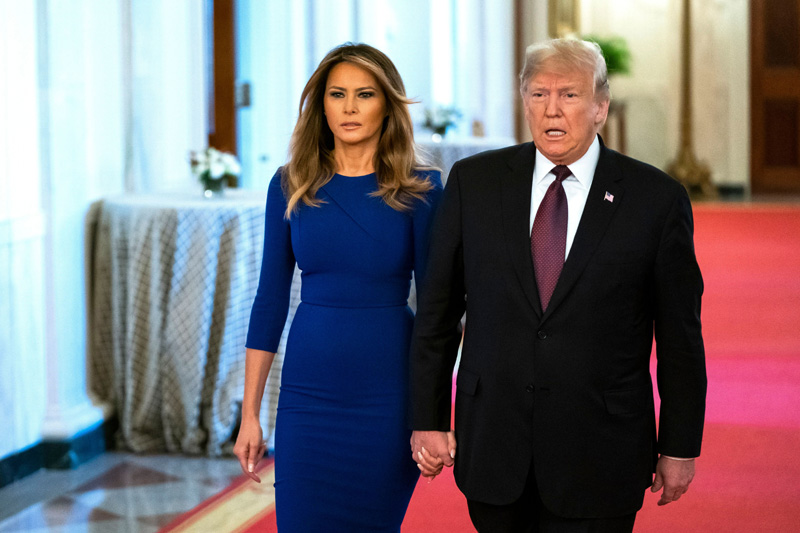 The Presidential Medal of Freedom is the highest honor that can be given to a civilian and Trump’s 2018 list of those receiving it was somewhat bizarre. Three of the recipients are dead, including baseball player Babe Ruth, Elvis Presley and late Supreme Court Justice Antonin Scalia, whose wife appeared to accept the honor for him. He played a brief snippet of one of Elvis’ songs and recalled a performance where fans were “ripping the place apart, screaming. They were going crazy.” He also gave the nation’s highest honor to Republican party fundraiser and donor Miriam Adelson, wife of billionaire Las Vegas casino mogul Sheldon Adelson. The couple has donated millions of dollars to Trump and the GOP.