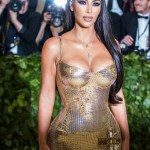 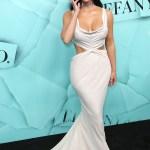 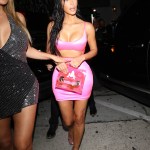 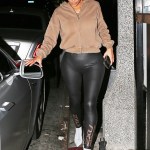 Kim Kardashian flawlessly stepped out in a skintight silver outfit for an LA gala on Nov. 16 with sis Kourtney Kardashian and newly single friend Larsa Pippen, who she’s helping get through a divorce.

Kim Kardashian, 38, flaunted her incredible body at the Street Dreams gala in West Hollywood, CA on Nov. 16 and we seriously couldn’t look away! The Keeping Up with the Kardashians star wore a silver skintight top and matching metallic silver pants with black heels for the outing as she met up with older sister Kourtney Kardashian, 39, who went braless in a tan top and black pants and BFF Larsa Pippen, 44, who donned a flattering black tank top and matching silky pants.

Larsa has been going through a public divorce from her NBA star ex Scottie Pippen, 53, ever since she filed for the split on Nov. 2 and Kim and Kourtney definitely proved their loyalty as friends when they were right by her side at the Friday night event. At one point, Kourtney and Larsa could even be seen displaying support and affection by holding hands. It was just last week on Nov. 4 that Larsa, who shares four kids with Scottie, stepped out for the first time since news of the split, which she stated was due to “irreconcilable differences,” made headlines. She attended Diddy‘s 49th birthday party in Hollywood with Kourtney and seemed to have a good time despite the difficult transformation.

In addition to Kim, Kourtney and Larsa, Kourtney’s ex Scott Disick, 35, and his 20-year-old girlfriend Sofia Richie were also at Friday night’s gala and they kept friendly vibes all around. The star-studded event had the ladies looking like they were enjoying themselves as they were seen chatting in a corner of the venue with other event-goers.

It’s great to know that these ladies will stick together in good times and in rough times and they all looked amazing while doing it!