Iggy Azalea is in the best shape of her life! The rapper showed off her abs on the red carpet at the launch of Cardi B’s Fashion Nova collection on November 14, and she’s toned AF!

Iggy Azalea, 28, turned heads on the red carpet at the Fashion Nova X Cardi B launch on Wednesday, November 14 at Boulevard3 in Los Angeles, CA! The rapper bared her toned midriff in an argyle-printed crop top. She added a formal touch to her look, wearing high-waist black pants with flared bottoms. Iggy completed her look with black, open-toe stilettos, which featured her neon green painted toes.

Iggy had her long, blonde locks down and poker straight. She later admitted on Instagram that it was a a “quality” wig that was able to withstand the a whole drink being tossed on it. Oh, you didn’t hear? — Bhad Bhabie — whose real name is Danielle Bregoli — threw a drink on the “Black Widow” rapper inside the venue. Videos from the party show Bhad Bhabie yelling at Iggy, after she throws a drink her way.

In a series of Instagram Story updates later that night, Bregoli defended her actions. “Bye broke bich,” she wrote. “Bye hoe. Glad u left wit a bag cuz u certainly ain’t making no money from music anymore. It’s simple. Don’t talk all sorts of s–t on the internet n come up to me like u my friend. Some of these hoes like u fake n 2 faced as f–k vbut I’m NOT that bich.” 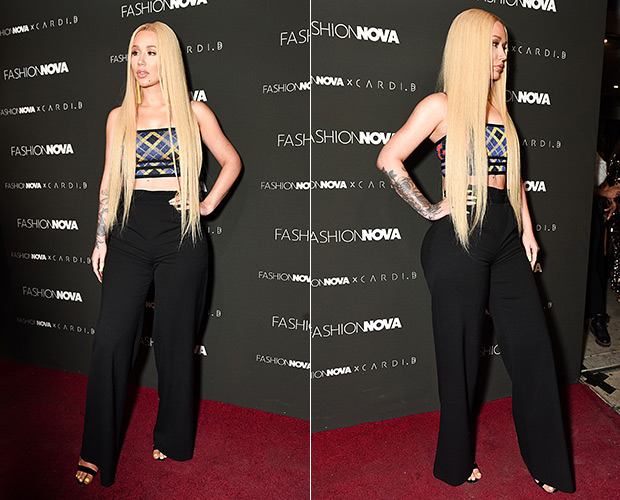 Meanwhile, Iggy didn’t let the teen bother her. Pointing at her wet hair wet hair in an Instagram Stories video, Iggy laughed about the incident with her friend, actress and model Raven Tracy, “Am I just going to have a half and half wig for the rest of the night?” she said, while showing footage from inside the party. “What kind of Jerry Springer? What kind of ‘who’s baby is this’ Dr. Phil ass sh-t? Oh, my God. I am a grown-up. I cannot,” she continued. In her caption, Iggy wrote, “So the Dr. Phil girl is really upset about me apparently and thought I’d fight a child?! LOL anyway! The fashion Nova party is LIT!”

While on her way home, Iggy explained in a series of Instagram Story videos that she’s too grown to be fighting a 15-year-old in the club. “I get that this little girl has made a name for herself acting a damn fool on television and online, but I’m a grown-up. I’m not about to waste my energy on that sh–t or be fighting a kid in a club. Come on,” Iggy said “Mama, good luck with your career. You’re young. You’re going to look back on this and you’re going to really feel dumb. I just think that s–t’s lame as hell, but maybe it’s ’cause I’m a grown-up. Anyway, goodnight, y’all. I’m going home. I’m tired,” she continued.