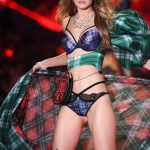 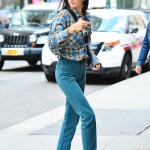 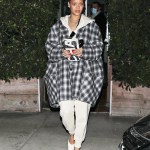 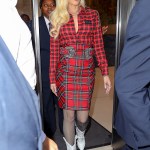 Plaid in the fall is kind of like florals for spring…not exactly groundbreaking, but still stylish and totally cute and chic! Get fashion inspo from celebs below!

Gigi Hadid just landed in Japan on Nov. 13, wearing the Storets Brenda Padded Check Shirt. The yellow shirt can be worn as a jacket, since it has extra padding, and it’s only $112! Kendall Jenner wore a black and white Louis Vuitton outfit back in March 2017, at the LVMH Prize for Young Fashion Designers during Paris Fashion Week in France. Both outfits are perfect to transition from the warmer weather to the chill that is coming soon!

Of course, Gigi and Kendall both wore sexy plaid outfits for the Victoria’s Secret Fashion Show, which was taped in New York on Nov. 8. The show airs on Dec. 2! We were at the taping, and you’re not going to want to miss it! Olympic Champion gymnast Aly Raisman wore a plaid suit by Tanya Taylor at the CFDA Vogue Fashion Fund Awards in New York on Nov. 5. So chic!

While touring New Zealand in October, a pregnant Meghan Markle wore a plaid Karen Walker trench coat. First Lady Melania Trump also opted for a plaid coat this fall. A plaid trench should be a staple in everyone’s wardrobe! In October, Reese Witherspoon paired a plaid shirt (the Hunter – Spruce White from RAILS) with blue jeans — perfect for some fall inspo in a warmer climate!

Of course a red or green plaid is extra festive during the holiday season, but even a gray plaid can be perfect for a holiday party. Click through the gallery to see a ton of stars wearing plaid!