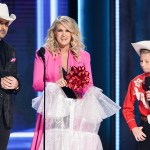 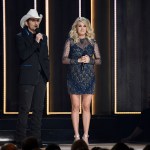 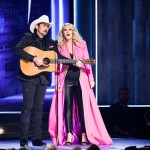 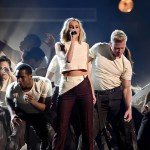 These three put the super in supergroup! Miranda Lambert, Ashley Monroe and Angaleena Presley of Pistol Annies wowed the CMAs audience with their collab. See for yourself!

What’s better than a performance by Miranda Lambert, 35, Ashley Monroe, 32, or Angaleena Presley, 42, at the 2018 CMAs? A collaboration from all three as the iconic Pistol Annies supergroup! The talented trio took the stage on Nov. 14 to perform her hit new song “Got My Name Changed Back.” They didn’t just sound amazing and have great onstage chemistry, but the country singers also couldn’t have looked better if they’d tried! Miranda wore a black lace dress with heels and had a washboard around her neck — yes, really — while Ashley and Angaleena rocked sparkles. Name a more iconic collab, we dare you!

The Pistol Annies have been performing nonstop this year approaching the release of their Interstate Gospel album. From Jimmy Fallon‘s show to the CMT Artists of the Year telecast, they’ve been hyping fans up with their incredible vocals. And while the group itself may not be nominated for an award, one of them has been recognized individually. Can you guess who? Miranda is up for a total of two this year — Female Vocalist and Musical Event of the Year. But whether she nabs them or not, the “Got My Name Changed Back” singer is definitely going home a winner after such a solid performance.

But they weren’t the only ones slaying the stage at this year’s Country Music Association Awards! Other performers of the night include Keith Urban, 51, Jason Aldean, 41, and Florida Georgia Line.

Cheeky, hilarious performance by Miranda Lambert and Pistol Annies of "Got My Name Changed Back" at the #CMAawards (though gotta admit, we wondered if Blake Shelton was in the crowd…) #CMAsOn2 pic.twitter.com/L1c2YYZQdj

While it’s impossible to pick a favorite, these three lovely ladies definitely helped keep this show so entertaining. This was their first CMAs performance, and we’ve got our fingers crossed that it isn’t their last.