Another day, another great look courtesy of Olivia Culpo. The 26-year-old model arrived on the red carpet ahead of the CMA Awards and we’re obsessed with her look! She showed up to the Bridgestone Arena in Nashville, Tennessee wearing a black bodysuit with a sheer embroidered dress over it.

The spaghetti-strap dress featured a slit in the front, which helped show off her long legs, as did her black stilettos. Ahead of the awards show, Culpo shared a clip on her Instagram story of her putting tanner on her legs to get them camera ready, so TBH, her legs need their proper recognition!

Culpo’s beauty look was also on point. The former Miss Universe slicked her hair back into a ponytail, showing off her gorgeous drop earrings. Her brow game was strong, as was her sharp wing eyeliner. A highlighter gave her cheeks a brilliant glow, and her lips looked pretty thanks to a soft pink lipstick. Stunning! 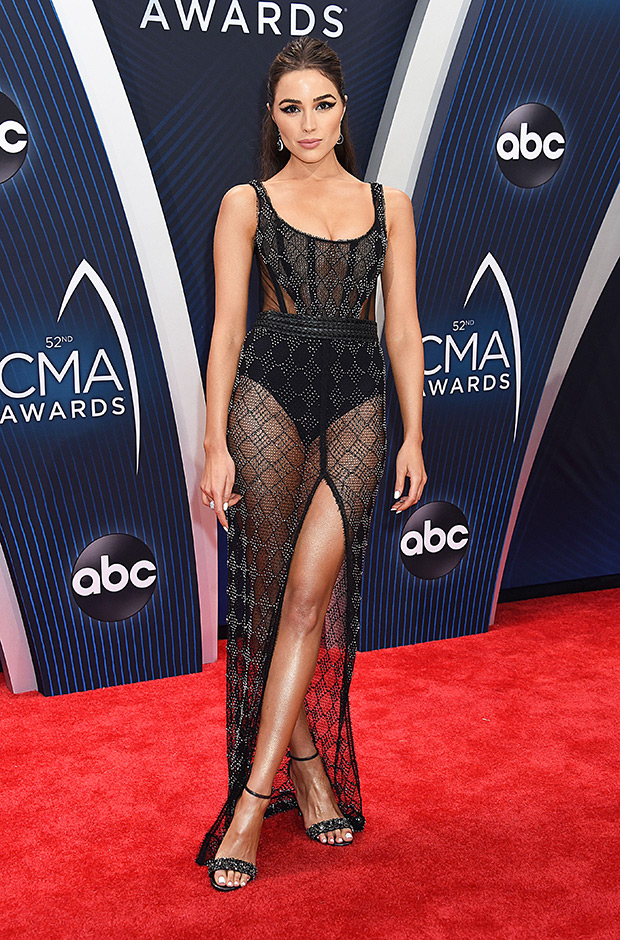 Culpo obviously isn’t a country singer, so you might be wondering what the heck she’s doing at one of the biggest events in country music. Well, it’s simple really: she’s presenting an award! The Country Music Association Awards typically branch out and get presenters from all realms of pop culture. For instance, another model, Karlie Kloss, showed up last year to present her good friend Taylor Swift with the award for Song of the Year. The “Delicate” hitmaker won it for writing Little Big Town‘s track, “Better Man,” but actually skipped the show to attend Saturday Night Live rehearsals.

Culpo won’t be the only non-country star at the event, either. Sharna Burgess from Dancing With The Stars, Mackenzie Foy from Disney‘s The Nutcracker and the Four Realms, actor and singer Dennis Quaid, Lionel Richie, and Stranger Things star Noah Schnapp are all slated to present awards at the 52nd annual CMA Awards.

But with all these stars comes plenty of opportunities for spectacular red carpet moments. Check out the gallery above to see the rest of the arrivals at the 2018 Country Music Association Awards!