Mariah Carey looked chic as ever in an all black outfit, while out in NYC on November 13! The singer nailed street style in a curve-hugging black dress with matching booties and a fierce leather jacket!

Mariah Carey, 48, is looking good! The singer was photographed leaving her New York City apartment on November 14, in a sultry catsuit that made us do a double-take. Mariah — whose new album, Caution is set for release on November 16 — stunned in a tight, black dress that showed off a touch of cleavage. She kept the color scheme going with black tights and booties.

Mariah topped off her look with (our favorite style staple), a cropped leather moto jacket. And, she accessorized with black, circular sunnies and silver earrings. The singer was all smiles as she made her way out to the city streets, solo. — See her full look below!

It’s an exciting time for Mariah, as she just finished her stint as an advisor on The Voice, and her new album is right around the corner. Caution is the followup album to her 2014 record, Me. I Am Mariah… The Elusive Chanteuse and will feature recently released singles “With You” and “GTFO.” 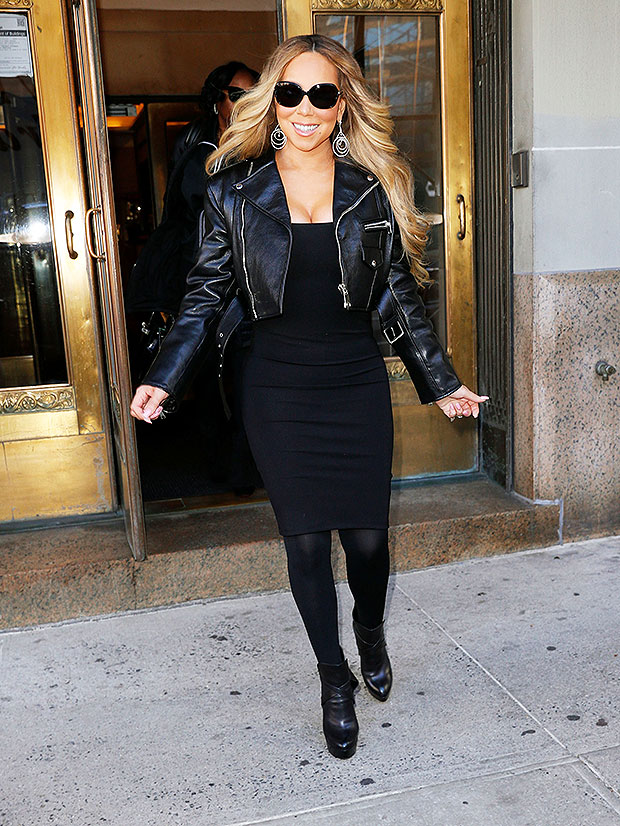 Mariah Carey steps out in an all black outfit, leaving her apartment in New York City on Tuesday, November 13.

Mimi took to social media to announce the title and release date of her forthcoming album on October 15. She shared a video on Twitter alongside her seven-year-old son Moroccan. “The name of my new album is Caution,”  she said in the clip, while leaning on velvet red stairs. She then asked her son what the release date is. “November 16!” Moroccan yelled before Mariah blew a kiss to the camera.

As for why she named her album “Caution”? — “The funny thing is I didn’t call it Caution because I’m, like, ‘Ooh, I am being cautious.’ It’s just because of a song called Proceed With Caution. It’s more of a wary love song,’ Mariah told Metro.