Fans of the British Royal Family have been eagerly awaiting new pics of Prince Louis, as Prince William and Kate Middleton‘s seven-month-old son hasn’t been seen since his since his July christening. The adorable baby is smiling in his mother’s arms in new portraits released in honor of Prince Charles‘ 70th birthday. He looks so much like Kate, down to her eyes and smile! The photos were scheduled to be released on Nov. 14 when he turns the milestone age, but they leaked early on Nov. 13. In one pic everyone smiles straight into the camera, as Prince Charles and wife Camilla are seated on a bench in front of his sons, as he holds grandson and future heir to the throne Prince George, 5, over his knee. Three-year-old Princess Charlotte is her usual adorable self seated next to Camilla.

Prince Harry,and Prince William  stand behind their father in the photos which were taken at Charles’ residence Clarence House. Wills flanked by Kate and little Louis while Meghan Markle is standing to husband Harry’s left. Everyone puts on wonderful smiles for the formal portrait, but Meghan and George are totally cracking up about something in a second shot that appeared to be an outtake. But it’s so great that it shows the less formal side of the family.

Everyone’s eyes are looking off camera in the second pic and whatever is going on has them in stitches. The photos appears to have been taken before Meghan and Harry announced that they’re expecting a baby in the spring of 2019, as Meghan’s belly is flat and she looks ultra chic in a white sleeveless sheath dress with navy accents and a matching belt. 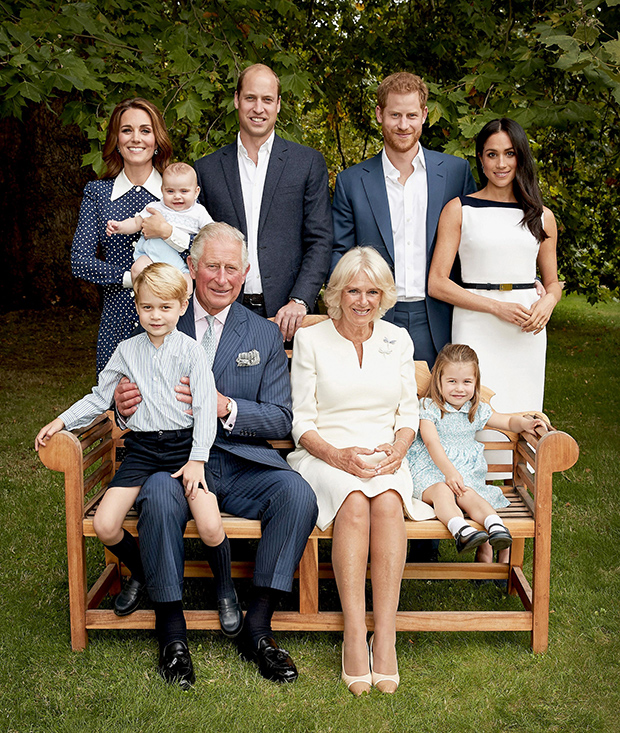 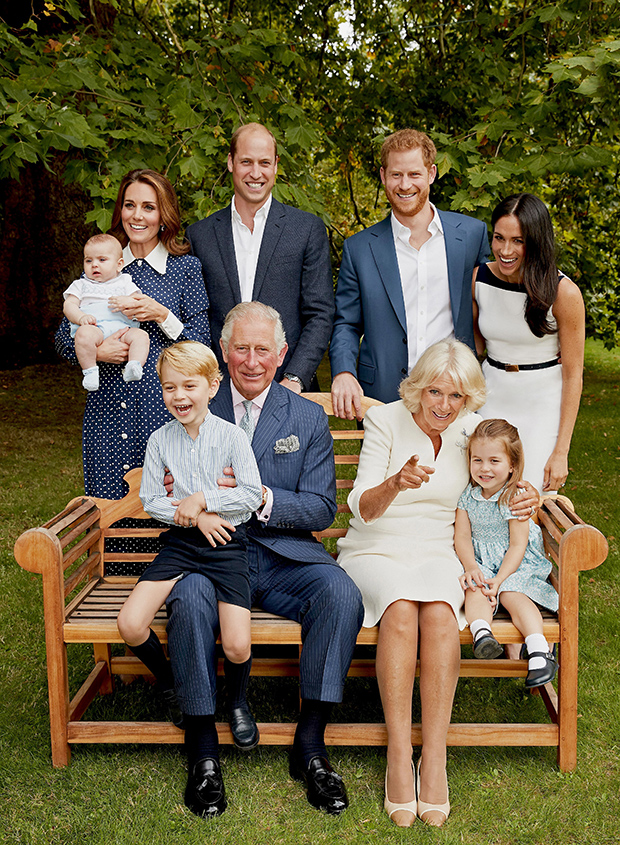 Blue and white is the theme of the portrait, as everyone is perfectly color coordinated. Kate looks absolutely lovely in a navy dress with white polka dots and a white collar and cuffs. Wills and Harry are casual-formal in blue jackets with white shirts underneath but no tie. Charles is wearing a pinstripe suit and tie as he should since he’s the birthday boy and it’s his big moment turning 70.

Charles’ royal photographer Chris Jackson captioned the photos: “I’ve travelled all over the world photographing the Prince of Wales for the last 15 years from Durbars in Nigeria to the Galápagos Islands, Pakistan, Japan and many more as well as well as covering numerous domestic Royal Engagements so I was delighted to have been asked to take these official portraits of The Prince surrounded by his family to celebrate the important milestone of his 70th Birthday. It was particularly special to capture such an informal and relaxed family portrait over a fun afternoon in the gardens of Clarence House.”