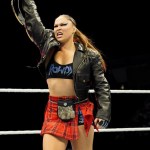 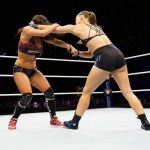 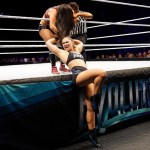 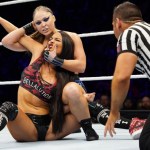 In an EXCLUSIVE interview with us, WWE superstar Becky Lynch vowed ‘nothing’ including her broken face would get in the way of her much-anticipated match with Ronda Rousey on Sunday at Survivor Series. But now the showdown is off!

The WWE’s Survivor Series pay per view event on Nov. 18 has just taken a massive hit, as the Champion vs. Champion showdown has been called off. Monday Night Raw Women’s Champion Ronda Rousey and SmackDown Live! Women’s Champion Becky Lynch were scheduled to go head to head in the ring and the battle between the two WWE Superstars was going to be one of the highlights of the card. Unfortunately Becky was involved in a massive brawl at the end of Raw‘s Nov. 12 go-home edition, sustaining serious injuries to her face that also resulted in a concussion. She vowed to us in an EXCLUSIVE interview earlier in the day for her new film, Marine 6 that “nothing” would keep her from fighting Ronda, but the match is now off and Charlotte Flair will be stepping in to replace her.

“Yeah! I’ve got a broken nose but nothing to fuss about, nothing really keeps me down!” Becky, 31, told us earlier on Nov. 13 vowing that she was going to still fight Ronda despite her hours old injury.  She even thought that her fight with Ronda should be the highlight of the Survivor Series PPV itself.

THE CHAMP has SPOKEN.@MsCharlotteWWE will finish the job #SDLive #WomensChampion @BeckyLynchWWE started this Sunday at #SurvivorSeries against @RondaRousey! pic.twitter.com/wY5xPoOqic

At the top of Nov. 13’s SmackDown Live go-home edition, the announcing team recapped the events of Raw’s bloody melee and then said that due to a “broken face” and severe concussion, Becky would not be able to compete at Sunday’s event against Ronda. She then appeared before the crowd with massive bruises to her face and told the audience she would pick someone she knew “would get the job done” against Ronda and scoped out the list of potential candidates. She settled on Charlotte Flair, telling her to “go beat Ronda like I was going to beat Ronda” then giving her a massive emotional bear hug.

The change of events will certainly make a loaded Survivor Series very interesting to see this weekend. Who do you have as your pick now to win the big match this Sunday? Ronda Rousey or Charlotte Flair?