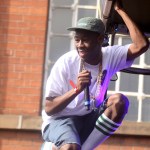 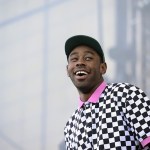 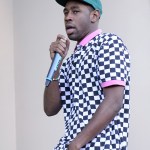 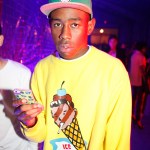 Jaden Smith claimed that rapper Tyler the Creator is his boyfriend! Here’s everything you need to know about him!

While at Tyler the Creator‘s Camp Flog Gnaw, Jaden Smith took to the stage and yelled that Tyler was his “mother-f**king-boyfriend”. Here’s what we know about the rapper romantically linked to him.

1. Tyler seemingly denied Jaden’s claims. As Jaden is calling him his “boyfriend”, Tyler was spotted waving his finger and shaking his head “no”. Although afterward, Jaden tweeted, “Yup @tylerthecreator I Told Everyone You Can’t Deny It Now.”

2. He was arrested in 2014. After his concert at South by Southwest, Tyler was charged with a Class A Misdemeanor for inciting a riot, with a bond set at $25,000.

3. He’s an award-winning artist. Nominated for two Grammys in his career — one for Album of the Year in 2013 (Channel Orange as a featured artist), and another for Best Rap Album (Flower Boy) — he also won the 2011 MTV Video Music Award for Best New Artist.

4. He was good friends with Kendall Jenner at one point. While dating rumors swirled around them at one point, both of them shot that speculation down. Kendall tweeted at Tyler, “Apparently we’re dating.” In response, Tyler wrote in all caps, “Not possible, we’re both gay.”

5. He previously admitted to having a boyfriend when he was 15 years old, before denying it. “Open-minded now? I had a boyfriend when I was 15 in f***ing Hawthorne, n***a,” the rapper revealed on the Know Wave radio show in 2017. “If that’s not open-minded, then I don’t know what the f**k is.”

We’ll keep you posted with all of the latest news surrounding Tyler. In the meantime, check out all of his latest pics in our gallery above.