Following Farrah Abraham’s decision to pull out of her celebrity boxing match, the ‘Teen Mom OG’ star blasted those involved, saying she will ‘listen to her gut’ and never waste time with such ‘evil’ people again.’

“Always winning when your views are this amazing,” Farrah Abraham, 27, said in a Nov. 11 Instagram post, one day after she was supposed to face Nicole “Hoopz” Alexander in a celebrity boxing match in Atlantic City. Farrah dropped out of the fight, and judging by her message, she isn’t losing any sleep over her decision. “Always listen to your gut to do the right thing, it will save your energy, stay away from evil drama & focus on your successes & talents.”

“Boxing will for ever be apart of my life,” she captioned the shot from her vacation in Maldives. The Teen Mom star posed in a pink robe and a pair of boxing gloves, presumably what she planned to wear for her fight against Hoopz. Instead of wearing it to the ring in New Jersey, she obvious figured it would look better if she wore it poolside while on a tropical holiday. “I’m grateful I no longer tolerate the time wasting bad people who use me. #freedom #winning #victory #farrahabraham #strength #livingmybestlife.”

Farrah dropped out of the Boom Cups Celebrity Boxing Showdown, a charity event to raise awareness for anti-bullying, on Nov. 5. Farrah claimed the promoters — Damon Feldman and Michael Mak — didn’t meet her demands. “Damon the promoter [didn’t] book correct flights for my people, for my coaches and my mother and my daughter to come watch,” Farrah told HollywoodLife.com EXCLUSIVELY. “He is in breach of my contract. (He also promised) up to 32 rooms for celebrity guests, coaches and family. These are the things the promoters agreed to and could not deliver so they are in breach and it’s not my issue.”

Another factor in Farrah’s decision was the two-years probation she was recently slapped with following a June 2018 incident involving an employee at the Beverly Hills Hotel. She wanted to avoid “bad situations” and “liabilities for future legal problems,” ergo her decision to bail on the fight. 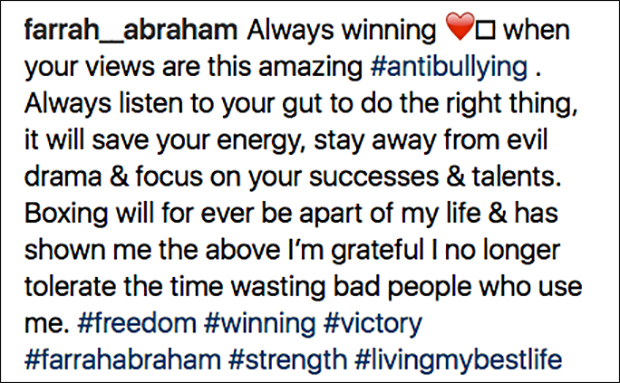 “I cannot put myself in a liable situation where they have someone publicly saying that they wanted to beat my face in,” Farrah told HollywoodLife.com, “or things of that nature. Again just putting me in a bad situation, a legal problem with police.” Instead, she decided to take her daughter Sophia on a vacation in Maldives, and judging by her post, she doesn’t have a single regret about that.