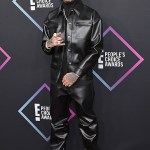 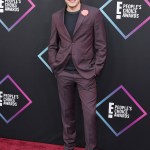 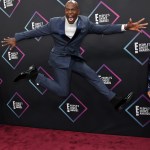 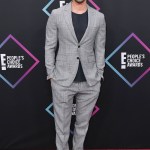 So. Much. Eye candy! You love’em, you voted for them, and now, all your favorite hunks are walking the red carpet  and at the 2018 People’s Choice Awards. Feast your eyes on these guys!

First to hit the carpet of the E! People’s Choice Awards were they hunkiest trio on TV — Shadowhunters stars Dominic Sherwood (who slayed with his Ted Baker London suit), Matthew Daddario, and Harry Shum Jr., who earlier in the day revealed he’s expecting his first child with wife Shelby Rabara. Congrats, you two! But the good looking guys hitting the PCAs did not stop there!

Soon after, Tyga, flying solo, made his way down the carpet, followed by Jimmy Fallon, Ryan Eggold, and Terry Crews, all looking their best and looking thrilled to be mingling with the fans for an evening. But the evening’s just starting with the red carpet! During the show, the hottest man in music, John Legend, took the stage for a very special performance, with wife Chrissy Teigen lovingly looking on. And wait, there’s more! Also expected  to be in the room for you to check out are Johnny Galecki, Darren Criss, Taran Killam, and so many more!

Hotties who are finalists for tonight’s big show include several Avenger studs, like Chris Hemsworth, Robert Downey Jr. and Chadwick Boseman, who beat out his co-stars to win Male Movie Star of 2018; Jamie Dornan and John Krasinski, who are dueling it out for Drama Movie Star of 2018; Ryan Reynolds and Chris Pratt, who are up for Action Movie Star of 2018; and Darren Criss, KJ Apa, and Pauly D, all up for TV awards.