Aubrey O’Day reportedly had a steamy affair with then-married Donald Trump Jr. in 2011. But she’s still not a fan of his father as president and wore a ‘F Trump’ t-shirt to the White House.

How do you really feel about the Trumps, Aubrey O’Day? The former Dannity Kane singer came to know both the 72-year-old tycoon turned president and his son Don Jr. when she appeared on Celebrity Apprentice in 2011. Reports surfaced in March of 2018 that she and DJT Jr. were involved in a passionate affair until he was busted by then-wife Vanessa in 2012. Now Aubrey is letting it be known she’s no fan of the first family, wearing a “F**k Trump” black t-shirt and skinny black jeans to pose in front of the White House.

In a pic she posted to Instagram on Nov. 10, Aubrey is posed with her legs spread apart white standing in front of the Washington D.C. mansion while holding up her right hand to make a peace symbol. The 34-year-old captioned the pic “politically correct” as she wore a long platinum wig and a tan trench coat.

Aubrey made no bones about how unhappy she was with her former boss’ election to the White House in 2016, despite the fact that she was reportedly involved in a torrid affair with his namesake son in 2011. In March of 2018 after DJT Jr.’s wife Vanessa filed for divorce after 12 years of marriage, the alleged affair came to light. Page Six reported that Don Jr., 40, was so hot for Aubrey that he considered leaving Vanessa for her until his dad told him to “knock it off.” On election night in 2016, Aubrey hinted at the romance, tweeting “my story I didn’t tell is worth millions now.” 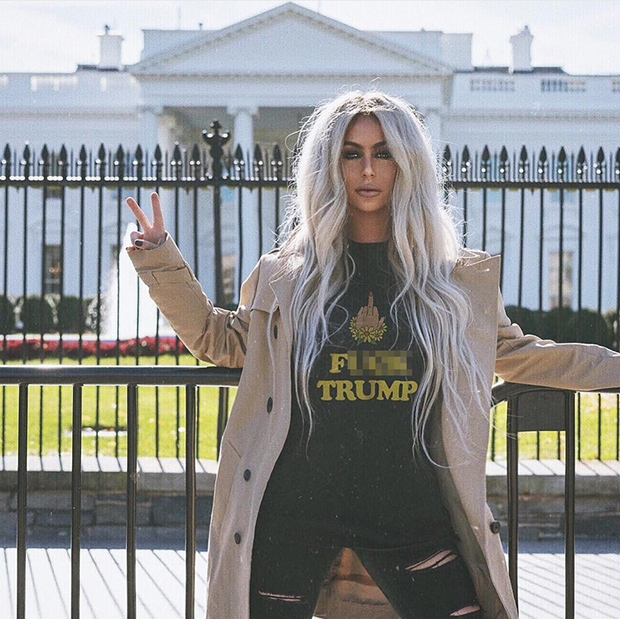 The reality TV personality has never been a fan of Trump’s politics. When he won the presidential election in 2016, she took to Twitter and wrote,  “I’m heartbroken. Every beautiful piece of progression that our country could have moved toward is now gone,” and “You can be a lying abusive ignorant piece of trash that is personally and publicly racist, sexist, & homophobic and run our country.” Looks like her stance on Trump hasn’t changed much with her protest shirt.