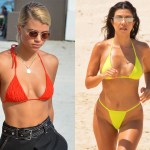 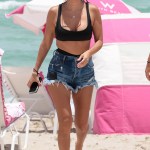 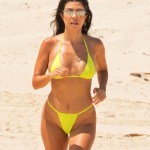 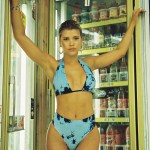 Could it be? HollywoodLife EXCLUSIVELY learned whether or not Sofia Richie will be making an appearance on ‘KUWTK’ and how Kourtney Kardashian feels about the possibility!

As 35-year-old Scott Disick’s romance gets increasingly serious with Sofia Richie, 20, fans have been wondering if the model will begin making appearances on Keeping Up With The Kardashians. HollywoodLife EXCLUSIVELY got the scoop on whether or not that will happen! “As Scott’s relationship with Sofia gets more serious, Kourtney remains dead set against Sofia being a series regular on Keeping Up With The Kardashians. Kourtney is not interested in paying Sofia or in increasing her profile in anyway,” a source close to the Kardashian family shares. “It’s not that she doesn’t like her or anything, Kourtney just doesn’t feel the need to bolster her fame in anyway,” the source added.

So, how does Sofia feel about not being invited on the reality show? She’s actually fine with it! “Not being invited to be a regular on ‘KUWTK’ is fine by Sofia, she has little interest at this point to be on reality TV,” the source continued. “Kourtney and her sisters have been careful to not even mention Sofia’s name on camera and they want to keep it that way. It has taken a lot for Kourtney to meet with Sofia, and while Kourtney is developing her own opinion and certain level of respect for Scott’s girlfriend, Kourtney has no interest in inviting her onto KUWTK.” HollywoodLife has reached out to reps of Sofia and Kourtney for comment.
Perhaps Sofia is camera-shy because she doesn’t want the details of her relationship with Scott splayed out for the public to see. Things have been seemingly tense between the two, and a stint on reality television surely wouldn’t help. On Nov. 3 Sofia was seen in tears during a heated exchange with Scott, as they attended Australia’s Melbourne Cup horse race’s Derby Day. At one point, the model can be seen wiping away tears from her eyes, and in another pic, she is visibly angry with Scott. The fight took place during the couple’s trip to Australia, but it looks like the land down under held more drama than romance for these two!
Sofia herself has also made comment on the possibility of appearing on the show. “I’m not a reality TV person,” she told W Magazine, during a September 2018 interview, after being asked if she would consider it. It looks like fans hoping to catch her on ‘KUWTK’ shouldn’t hold their breath!