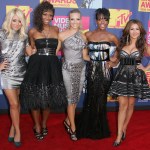 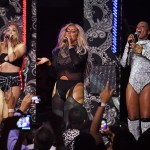 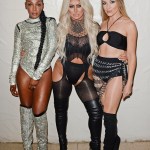 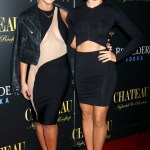 Well, that’s gonna leave a mark. Danity Kane decided to go crowd-surfing during one of their shows and it ended up being a major fail! Fans dropped one of the members and the fall looked pretty nasty. See it here!

Hopefully there was ice backstage at Danity Kane‘s show on November 8. During their concert the girl group — made up of Aubrey O’Day, Dawn Richards and Shannon Bex — decided to go crowd-surfing. It seemed like cool idea… until fans dropped one of them, and the fall looked pretty nasty. Obviously it was an accident, but, the now viral video has fans buzzing online!

It’s unclear which singer took a tumble, but you can see the blonde hair flying in the air. So, it could have been either Aubrey or Shannon. In the fan video, you can see two singers floating in the crowd as they belted out one of their hits. Then, all you see is a pair of black boots fly vertically as the rest of the singer’s body falls toward the ground. We really hope she’s doing alright!

The viral video comes after Danity Kane opened up a out racism and sexism in the music industry in a new interview. The group also slammed Diddy, who originally formed Danity Kane on MTV’s Making The Band 3 in 2005. In the third season of the show, O’Day, who often butted heads with Diddy, was fired from the group onscreen for being too “promiscuous.” When the group reflected on the moment, Richards spoke for O’Day and described Diddy’s behavior as “extremely sexist” and a “power move.”

“It gave him an excuse. It was to let you know, This is my show, this is my sh-t, and I want to prove to you that it’s my shit and I’m going to show you how much power I have over you by saying I’m going to control your lives,” Richards told Cosmopolitan in the interview, released on November 5. “It’s so much bigger than that even though, you’re right, it was extremely sexist.”

O’Day, who denied being promiscuous at the time, claimed that Diddy didn’t like “being challenged” by the women, and that the show attempted to turn the members against one another. “Puff plays one of the dirtiest games there is around and that’s what we were exposed to at 17 years old,” she said.

After a failed reunion in 2013, O’Day, Bex and Richards announced in August 2018 they would be hitting the road on a reunion tour together. The group revealed at the time that they now have complete creative control over their careers. Danity Kane is currently on tour.