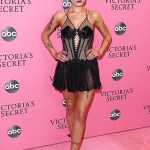 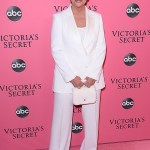 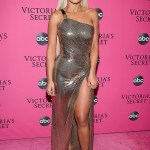 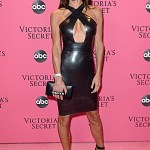 Fashion’s sexiest night is here! All our favorite celebs walked the pink carpet before the Victoria’s Secret Fashion Show on November 8, and looked impeccable. See Bethenny Frankel and more strut their stuff!

It’s not just the Victoria’s Secret Fashion Show that’s hotter than hot — the celebs turned up the heat on the pink carpet, too! Halsey, Bethenny Frankel, and more celebs showed off their sexiest looks on the carpet, striking a pose before our fave models graced the runway. Look at them work! Bethenny, in particular, looked like a bombshell. The Real Housewives of New York star was working it in a latex, cutout dress that showed off major cleavage. The criss-cross halter top had a massive cutout in the middle that showed the sides of her breasts, and was cut down to her ribs. Her body looked amazing! Only someone with a figure like hers could wear something that slinky. You can see a full-length pic of her outfit below!

While we’re totally excited to see Kendall Jenner, Behati Prinsloo, and Gigi Hadid make their triumphant return to the Victoria’s Secret runway after missing last year’s show, we were a little distracted by all the hotness on the pink carpet. Model Chantel Jeffries (aka Justin Bieber‘s ex) went fully with the theme and straight up wore lingerie on the carpet! And obviously, she looked amazing in the matching black bra and underwear set. She made it SFW by wearing a long, black lace duster over the lingerie, and pairing it with smart pumps and a chic, messy updo. Perfection!

To see more pics of your fave celebs, like Bebe Rexha, Kelsea Ballerini, and Kris Jenner walking the pink carpet at the Victoria’s Secret Fashion Show, scroll through our gallery above! Seriously; everyone looked SO amazing.