The mystery has been solved! After posting vague messages online after Kendall Jenner reunited with Ben Simmons, Anwar Hadid revealed he was just being ‘in his feelings.’

Anwar Hadid, 19, raised a few eyebrows with the cryptic messages he posted to his Instgram Stories days after Kendall Jenner, 23, was spotted hanging around her ex, Ben Simmons, 22. Anwar posted something about being “loved as deeply as I love” and about how someone’s “still in my mind.” With some suspecting he was devastated to see his summer fling go back to her former love, Anwar explained that he was just expressing himself. “Guys I live too(sic) feel im not sad im in a constant wave of emotions :),” he wrote over a photo of his leg, according to E! News.

“I used to be afraid to feel things,” he continued, posting this explanation over a black background, “cuz i felt as if the feelings of abundant happiness couldn’t be obtained forever, but openly feeling is now my only source of inspiration. And now that im not afraid to express my thoughts and feelings i kinda feel like everythings pretty mellow.”

So, Anwar was being like any nineteen-year-old boy and just expressing his feelings openly online. It’s good thing that Anwar’s feeling “pretty mellow,” because his earlier message – “I wonder if I could be loved as deeply as I love – and the one he shared on Nov. 7 – “If you don’t heal what hurts you…you will bleed on people who didn’t cut you” — would have some think he was taking the break from Kendall to heart. Considering how hot and heavy Anwar and Kendall’s summer fling was, with them hanging out and making out together across the world, it’s understandable that he would feel slightly bummed that things have cooled off. 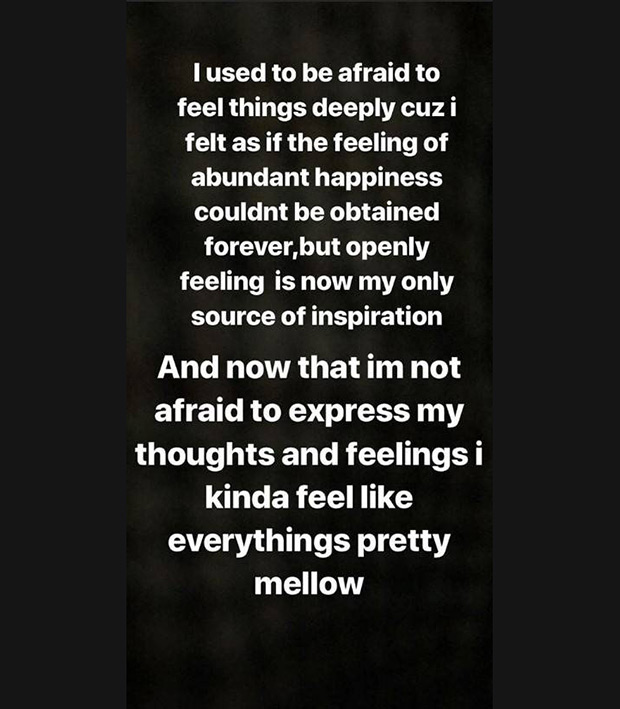 Anwar’s sister, Gigi Hadid, 23, is doing her best to stay out of this. Kendall’s BFF has vowed to not get involved, but an insider EXCLUSIVELY told HollywoodLife.com that, like Anwar, Gigi’s disappointed to see Kendall back with Ben. “Gigi would love for [Kendall and Anwar] to get serious,” the source said, adding that Gigi still holds out hope that they’ll work it out. “She feels like they would make a great thing, long-term.” In the meantime, Anwar can continue to share his feelings online with all his followers.