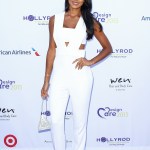 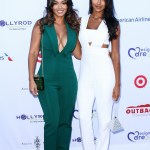 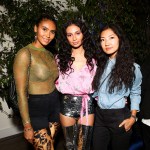 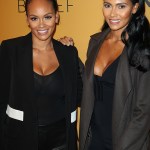 Does Usher have a new lady? He was spotted in the backseat of a car with Shaniece Hairston as they left Diddy’s birthday party on Nov. 6. We’ve got five things to know about the 25-year-old beauty.

Usher looks like he’s got himself a new girlfriend and it’s none other than Basketball Wives star Evelyn Lozada‘s 25-year-old daughter Shaniece Hairston. The stunning beauty and “Yeah” singer looked cozy in the backseat of a car as they left Diddy‘s belated 49th birthday party on Nov. 6. Evelyn reached out to HollywoodLife.com and told us “They don’t even know each other. Shaniece was at Diddy’s party, [but] with her friend Aisha, not Usher.”  But photos showed the 40-year-old gazing at Shaniece as they left together in a car from the bash together. We’ve got five things to know about Shaniece.

She was born in the Bronx. Her mom Evelyn is also NYC born, growing up in Brooklyn. Both now reside in Los Angeles.

2.  It is unknown who Shaniece’s father is.

Evelyn has never given up the goods on who is the daddy of her eldest child. She had Shaniece when she was just 17-years-old and has never discussed her daughter’s father.

3. Shaniece has had several famous boyfriends.

She was briefly involved with singer Sean Kingston then moved on to a three year relationship with English Premiere League soccer player Zat Knight.

4. Shaniece is a successful model and has appeared on reality TV.

She inherited her mom’s good looks and in 2015 signed with the Wilhelmina modeling agency. She also appeared on her mother’s Oprah Winfrey Network 2015-2016 reality show Livin’ Lozada.

I am so E X C I T E D about today that this is the first video I have posted of me speaking, where I don’t dislike hearing the sound of my own voice 🤣 I’ve been wanting to do yoga/pilates apparel for some years now. Here to is! Available in XXL sizes! Link in bio 🙏🏽 NamaSlay.

5. Shaniece is a yoga devotee.

She calls the practice her “first love” after being introduced to it at the age of 15. She attended a Bikram yoga class as the urging of one of her mom’s friends and has been completely hooked ever since. After doing regular 90 minute yoga sessions for a decade, Shaniece came out with her own line of yoga jumpsuits and yoga mat bags in 2018 as part of her SHA brand collection.