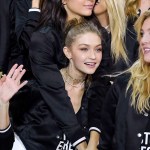 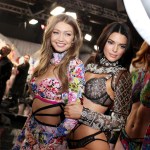 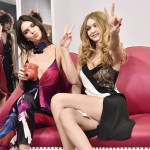 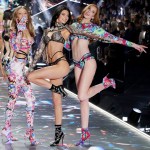 Gigi Hadid and Kendall Jenner, both 23, reunited at rehearsals for the 2018 Victoria’s Secret Fashion Show in New York City on Nov. 7. But a much more awkward reunion was caught on camera on Nov. 1 — that between Kendall and the Philadelphia 76ers point guard, Ben Simmons, 22! While it hasn’t even been a week since Kendall was filmed zooming away in the same vehicle with the NBA star, Gigi didn’t appear to resent her BFF for apparently moving on from her 19-year-old brother, Anwar. As you can see in the photo below, the supermodels wore huge grins as they embraced one other tightly.

Gigi’s chill attitude shouldn’t come as a big surprise! As we’ve told you, the runway regular “has vowed to stay out of things between Kendall and Anwar,” because “she knows he can take care of himself,” as a source EXCLUSIVELY told HollywoodLife on Nov. 7! But that doesn’t mean Gigi has ruled out a future for her best friend and brother. “She loves them as a couple though and hasn’t given up hope that they’ll end up together,” our source added, who also noted that the blonde beauty was “disappointed” that Anwar’s romance with the Keeping Up with the Kardashians star “seems to be cooling off.” There haven’t been any PDA or hickey pictures to grace our news feeds as of late, since the pair was last photographed leaving the Greenwich hotel in New York City at separate times on Oct. 9. Kendall and Anwar were first photographed making out at a CFDA Awards after-party in New York City on June 4! We’re just happy Gigi and Kendall put their friendship first, even after Anwar shared some troubling messages to his Instagram Story on Nov. 5, following the news that Ben and Kendall were hanging out again.

Well, the past is the past! Clearly, Gigi and Kendall are putting aside awkward history and looking forward — to their big lingerie fashion show tomorrow, that is! The Victoria’s Secret Fashion Show won’t air until Dec. 2, but the angels are already getting ready to strap on their wings as taping will take place on Nov. 8. The BFFs are celebrating the same milestone in their modeling careers, as it’ll both be their third VS show!

In preparation for the televised event tomorrow, the models attended fittings on Nov. 7. To tide you over until Dec. 2, check out our gallery of the sexiest VS runway pictures from over the years!